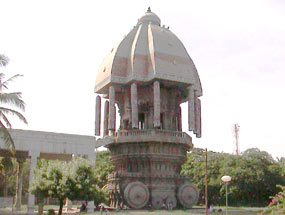 Valluvar Kottam is one of the most popular monuments of Chennai, the capital city of Tamil Nadu. It is situated at the meeting point of the Kodambakkam High road and the Village road. The magnificent monument dates back to the year 1976 and was constructed in the memory of Thiruvalluvar, the classical Tamil poet-saint. He was also the author of Thirukkural, written approximately 20000 years ago. The site where the structure of Valluvar Kottam is situated once housed an unused lake.

One of the modern landmarks of Chennai, the edifice has been built in the form of a temple chariot and is made of around 3000 blocks of stone. It is believed to be a replica of the temple chariot in Thiruvarur. The bas-relief in the front hall corridors stands adorned with all the 133 chapters of the Thirukkural, which comprise of 1330 verses. Valluvar Kottam rises to a height of approximately of 39 meters and has a marvelous life-size statue of the saint. The auditorium of the buildings is colossal in size and can accommodate upto 4000 people at a time.