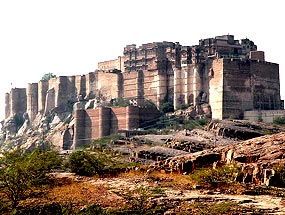 Mehrangarh Fort of Jodhpur is the most impressive as well as the biggest fort of Rajasthan. Infact, the fort is famous for being one of the largest forts in the whole of India. One of the most popular tourist destinations of Rajasthan, Mehrangarh Fort is perched at a height of approximately 400 feet above the city. It is bounded by imposing thick walls and comprises of a number of structures inside its complex, including several palaces with sprawling courtyards. The fort was built under the patronage of Rao Jodha, the fifteenth Rathore ruler.

Rao Jodha acceded the throne in the year 1458 and one year after his accession, laid down the foundation of the Mehrangarh Fort. The main reason for the establishment of the fort was that Mandore fort was no longer considered as secure and there was a need to move to a safer place. There is a very interesting story behind the establishment of the Mehrangarh Fort. The construction work for the fort was started on a hill, known as Bhaurcheeria, the mountain of birds. At that time, it was occupied by a hermit, known as Cheeria Nathji, the lord of birds.

To build the fort, Cheeria Nathji was forced to leave his cave. Angered by this act, the hermit cursed Rao Jodha, saying that his citadel will suffer from the scarcity of water. To escape the effects of the curse, Jodha built a house and a temple in the fort, near the hermit's cave, to appease God. Jodha then took the extreme step to ensure the prosperity of his fort. He buried a man alive in its foundations, by promising to look after his family throughout their life. Today, Mehrangarh Fort boasts of being the pride of Jodhpur.

The walls of the fort rise to a height of 36 m, with their width being approximately 21 m. There are three magnificent gates inside the fort complex, each constructed to commemorate some victory. The numerous palaces situated inside the fort are adorned with exceptional decorations. The most exquisite amongst these are Moti Mahal (Pearl Palace), Phool Mahal (Flower Palace), Sheesh Mahal (Mirror Palace), Sileh Khana and Daulat Khana. Mehrangarh Fort also houses a rich collection of artifacts.

Period Rooms
There are a number of period rooms inside the Mehrangarh Fort.

Moti Mahal
Moti Mahal is the largest period room of the fort. Raja Sur Singh built the palace, which has five alcoves leading onto hidden balconies. It is believed that these balconies were intended to be used by his five queens, for listening in on the court proceeding.

Sheesh Mahal
Sheesh Mahal has been as per the typical Rajput architectural style. The palace is adorned with exquisite mirror work, an intricate mosaic of tiny fragments. The work has been superimposed over painted religious figures of plaster.

Phool Mahal
Phool Mahal, built by Maharaja Abhaya Singh, is the most splendid period room of Mehrangarh. It was intended to be used as a chamber of pleasure. Here, the Maharajas used to watch girls dancing under a ceiling of gold filigree.

Takhat Vilas
Takhat Vilas served as the residence of Maharaja Takhat Singh, the last ruler to stay in the Mehrangarh Fort. The ceiling of the palace has been adorned with splendid glass balls.

Galleries
The several galleries of Mehrangarh fort are definitely worth a visit.

Howdah Gallery
Howdah is the name given to the two-compartment wooden seat tied to the back of an elephant. The front compartment is large and has a raised protective metal sheet, while the rear one is small. The front one was meant for the kings or royalty and the rear one was for the bodyguards. One can still see some howdahs of that period in the gallery.

Palanquin Gallery
Palanquins were used as a means of travel by the ladies of the royalty, till the second quarter of the 20th century. Numerous decorated palanquins can be seen in this gallery.

Daulat Khana
The Daulat Khana houses a rich collection of fine and applied arts of the Mughal period.

Armory
The gallery that used to serve as the Armory exhibits an assortment of rare weapons, dating back to every period in Jodhpur. The display includes sword hilts in jade, silver, rhine horn, ivory, shields studded with rubies, emeralds and pearls, guns with gold and silver work on barrels, personal swords of emperors, etc. Then, there is the Khanda of Rao Jodha, which weighs over 7 pounds, along with the swords of Akbar and Timur.

Turban Gallery
Turban Gallery displays different types of turbans that used to be worn by the people of Rajasthan in the past.

Folk Musical Instruments Gallery
This gallery houses various types of folk musical instruments, some of them characteristic of a particular group or community and some, of a particular region.