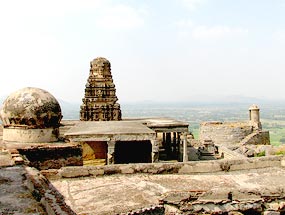 Gingee Fort counts amongst the few forts that are still in existence in Tamil Nadu. It is situated in the Villupuram district, which is situated at a distance of approximately 160 km from the Chennai city of India. The district also lies close to the union territory of Pondicherry. One of the most unassailable citadels of India, the fort was given the name of 'Troy of the East' by the British. The place where the Gingi fort today stands, was once the site of a small fort built by the Chola dynasty in 9th century.

However, when the Vijayanagar Empire took over in the 13th century, modifications were carried out at the fort. It was then that the fort was elevated to the status of an impregnable citadel, which was intended to protect the small town of Gingee. The fort also served as the head quarters of the Gingee Nayaks, when they used to exercise their domination over the state of Tamil Nadu. The main reason behind the establishment of this fortress was to serve as a protection against any Muslim invasions.

Gingee fort came under the occupation of the great Maratha leader, Shivaji, in the year 1677. He recaptured the fort from the Bijapur sultans who had initially taken over its control by defeating the Marathas. During Shivaji's reign, the fort was further strengthened. The decade of 1690s saw Gingi fort being constantly laid under siege by the Mughals. However, a full decade passed before they could take over the fort. From the Mughals, Gingee fort fell into the hands of the Carnatic Nawabs, who lost it to the French in 1750.

Before the British took control of the fort in the year 1761, it briefly went into the hands of Hyder Ali. Gingee fort spreads over three hills, which have been connected through its walls. The total area enclosed within the fort is approximately seven sq km. It is situated at a height of approximately 800 feet and stands surrounded by a 24 m wide moat. Gingee fort comprises of a number of structures inside its premises, like Kalyana Mahal (marriage hall), granaries, prison cells, a military gymnasium, etc.

There is also a temple inside the fort, dedicated to a female Hindu deity, known as Chenjiamman. The ramparts have a sacred pond, which is known as 'aanaikulam'. The naturally hilly terrain of Krishnagiri, Chakkilidrug and Rajagiri hills make up the walls of Gingee fort. The gaps in these natural walls have been sealed with the help of the main wall, which has a breadth of approximately 20 m. Gingee fort was declared a National Monument in the year 1921 and is presently under the control of the Archeological Department.