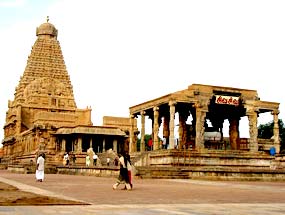 Brihadeeswarar Temple is a magnificent temple, situated in the Thanjavur district of Tamil Nadu. It dates back to the 11th century and was founded by the Chola King Rajaraja Chola I. The temple is considered to be an architectural wonder and is the perfect example of the expertise of the erstwhile Chola rulers, who once ruled over the peninsular India. One of the tallest temples of the world, Brihadeeswarar Temple is designed in such a way that the vimana never ever casts a shadow on the ground at noon.

Brihadisvara Temple has been built as per the South Indian style of temple architecture. It is dedicated to Lord Shiva, whose idol has been kept in the Garbha Griha (sanctum sanctorum). There is a tall sanctum tower (srivimana) inside its complex, along with splendid gopurams (elaborate gateways). A fully carved structure, Brihadeeshwarar Temple was designed by the chief architect of the Chola court, Sama Varma. It stands on a 29 m square base and rises to a height of somewhere around 65 m.

Surrounding the Brihadeeswarar Temple is a huge compound, with walls that are over 15 m high. Only the inner sanctum sanctorum, along with the gopuram (tower) adorning its top, was constructed by Rajaraja Chola I. This construction took a period of twelve years. To further enhance the beauty of the temple, the king got it adorned with a 12.5 feet tall finial, which is made of 9.25 kg of copper and is plated with 800 gm of gold. Subsequent rulers of the Chola dynasty added to the temple, never once letting the construction go out of sync.

The entrance of the Brihadeeshwarar Temple leads to a huge rectangular enclosure, which has been lined with stones. Moving through the corridor, one comes across a stone statue of Nandi Bull (the mount of Lord Shiva) and then, two idols of Lord Ganesha. Thereafter, one reaches the sanctum sanctorum (garbha griha), where the deity has been enshrined. The inner walls of the garbha griha illustrate 108 dance poses enacted by Lord Shiva. There are numerous inscriptions also, which are said to give details of the modern times.

The tower situated to the right of the temple is also an architectural beauty. The topmost tower comprises of a huge dome, made of black granite and weighing around 80 tons. The sanctum tower, or the srivimana, is surrounded by a rectangular prakara or corridor that comprises of two squares. The main tower is situated in the center of the rear square, while the vimana has 16 tiers and measures 200 feet in height. As per the India mythology, the point where the tower stands represents Mt Meru, the center of the universe.