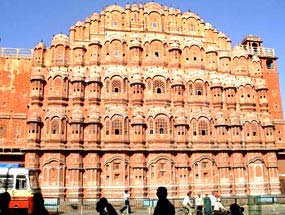 Hawa Mahal is a magnificent building situated in the 'Pink City' of Jaipur. A multi-layered monument, it dates back to the year 1799. The palace was built under the patronage of Sawai Pratap Singh, the grand son of Sawai Jai Singh and son of Sawai Madhoo Singh. Mr. Lal Chand Usta was selected as the architect of the splendid Hawa Mahal. The structure of the palace looks quite similar to a beehive. It has been constructed out of red and pink sand stone, which have been meticulously outlined with white borders and motifs.

The palace stands overlooking one of the main streets of Jaipur. It was initially intended to serve as the place from where women of the court could watch the activities taking place in the bazaar and the surrounding streets, from the comfort of stone-carved screens. Hawa Mahal has over 900 niches and has been built in the shape of the crown that adorns Lord Krishna's head. The palace has five stories and is ornamented with small casements, each of them having tiny windows and arched roofs.

The inner face of the palace as well as the chambers is quite plain and lacks any ornamentation. The entry of the palace is from its rear, rather than its front portion. A majestic door provides the entry to the palace and the first structure that one comes across is a spacious courtyard. Surrounding the courtyard on three sides is a double-storied building. The building houses an archaeological museum inside its premises. Only the eastern wing of the Hawa Mahal has three more stories above.

Hawa Mahal stands on top of a high podium and rises to a height of fifty feet. The thickness of the palace is even less than a foot and it comprises of a number of small personal chambers. Instead of regular stairs, there are ramps reaching the upper floors. As one looks up from the roadside, Hawa Mahal comes across as a delicate screen with its numerous casements. Little lattice worked windows, small balconies and arched roofs, with hanging cornices, make the palace definitely worth a visit.