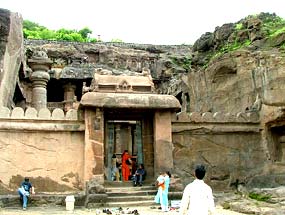 Aurangabad caves are situated on the outskirts of the Aurangabad city of Maharashtra. They lie in a valley, located between the Sihyachal and Satara range of hills, which is irrigated by River Dudhna. There are twelve caves in toto, which are basically categorized into three groups, depending upon their location. The first group of caves consists of cave number 1, 2, 3, 4 and 5, the second group comprises of cave number 6, 7, 8 and 9, while the last and the third group is made up of cave number 10, 11 and 12.

The design of the cave number three represents a Chaitya Griha of the Hinayana order of Buddhism. The heterogeneous nature of rock formation in this cave has made it difficult to preserve the caves in a proper manner. Since the rock formation is heterogeneous, the authorities have also not been able to carry out large-scale excavations here. Many portions of the caves, where the rock formations are wobbly, have been left unearthed. Even cave number 1 is an unfinished vihara, with the ceiling of its verandah having fallen down.

Cave number 2 also represents a vihara and has a shrine of Lord Buddha at the rear. The rest of the Aurangabad Caves are usually attributed to the reign of the Kalachuri dynasty. Of all the caves, cave number 7 is the most intricately built and is also quite known for its sculptural ornamentation. The cave has a shrine in the center, along with an outer corridor that runs all around it. There are recesses, at regular intervals, in the corridor. These recesses have been beautifully carved with the images of Buddhist Gods and Goddesses.

The verandah of the cave has a splendid front wall, which stands adorned with magnificent representation of a panel of litany of Avalokitesvara and Bodhisattva, on either side of the entrance to the shrine. The litany of Avalokitesvara, found in Aurangabad caves, is even more detailed as well as intricate than the ones found in the Ajanta and Ellora caves. It represents Bodhisattva Padmapani as the 'Savior of Eight Great Perils' (Fire, Theft, Demon, Elephant, Lion, Shipwreck, Snake and Monkey).

Apart from the panel mentioned above, the Aurangabad caves are adorned with other impressive sculptural panels also. One such panel is that of Tara, principal consort of Avalokitesvara. It has been illustrated to the left of the central shrine door. Then, there is also a panel that depicts a group of six female musicians on the left wall of the main shrine, believed to be a representative sculptural panel of the Aurangabad Caves. The main female, shown at the center of the panel, is in a dancing mudra, while the five others are playing different musical instruments. The remaining Aurangabad caves have incomplete excavations.