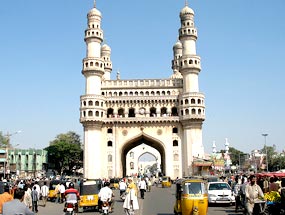 Charminar is a huge and magnificent edifice, situated amidst the crowded old city of Hyderabad. Sultan Muhammed Quli Qutub Shah got the structure made, as a commemoration of the eradication of plague, soon after he shifted his capital from Golconda to Hyderabad. The construction work on this historical monument was started in the year 1591 and got completed by 1612. There are four gracefully carved minarets adorning the monument and it is from these minarets that it got its name as the Charminar, meaning 'four' (char) 'pillars' (minars).

Charminar is a masterpiece of Qutub Shahi architecture and stands surrounded by colorful shops of Lad Bazaar (Choodi Bazaar). The monument has been built upon four grand arches, which face the four different directions. Charminar of Hyderabad has four tall minarets and a mosque on its top floor. These slender minarets and their spiral staircases add to the splendor of the monument, which is square in its shape and is adorned with stucco ornamentation. The mosque has 45 covered prayer spaces as well as some open spaces for praying.

Charminar is popularly known as 'The Arc de triomphe of the East'. Each side of the monument measures 20 m and each edge has a pointed high minaret. The four minarets rise to a height of 48.7 m above the ground and can be seen even miles away from the monument. There are four stories in each minaret, which look like delicately carved rings around it. All the sides of the Charminar open into a plaza through giant arches. Each arch is 11 m in width and rises approximately 20 m to the pinnacle.

There is a clock in each of the arches, which were installed in the year 1889. Charminar comprises of two galleries within its complex, one over another. The terrace is surrounded by a stone balcony and is vaulted underneath, making it appear like a dome. The fluted minarets of Charminar have been built into the main edifice and have winding steps inside them. These steps lead to the upper floor, which provides a breathtaking view of the entire city. Charminar looks exceptionally beautiful at night, when it is completely illuminated.