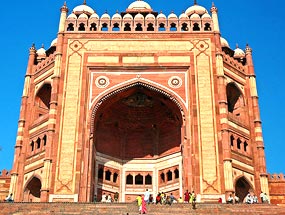 Buland Darwaza, a massive gateway, is situated in Fatehpur Sikri, a deserted city near Agra. Mughal Emperor Akbar got this gateway constructed as a commemoration of his victory over the King of Khandesh (now Gujarat) in 1573. Buland Darwaza of Agra dates back to the year 1575 and has been built as per the Mughal style of architecture. It holds the distinction of being the highest gateway of not only India, rather the whole of the world. It looms over the courtyard of the Jama Masjid and provides entrance to the mosque.

One needs to climb a flight of 42 steps in order to reach the gateway, which stands tall at a height of 40 m. It is approximately 35 m in width and is made up of red and buff sandstone, which has been adorned with exquisite carving as well as inlaying of white and black marble. On the central face of the Buland Darwaza, an inscription has been carved. This inscription brings to light the religious tolerance of the great emperor. The gateway is also adorned with calligraphic inscriptions from the Quran on the front and the pillars.

Buland Darwaza comes across as semi octagonal in its plan and stands crowned by pillars and chhatris. One can easily make out the early Mughal design of the gateway, which is flanked by towering arches. The roof of Buland Darwaza has thirteen smaller domed kiosks. Apart from that, there is a stylized battlement and a number of small towers. The eastern archway of the Buland Darwaza has been adorned with a Persian inscription, which gives an account of Akbar's conquest over Deccan in the year 1601.