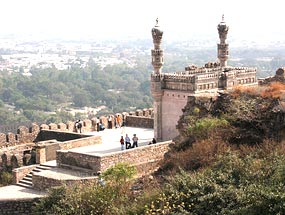 Golconda Fort is a magnificent monument, situated on the western periphery of the Hyderabad city. The fort was built under the patronage of Mohammed Quli Qutub Shah, in the year 1525. The culture as well as splendor of the Nawabs is truly reflected in the architectural style of the Golconda Fort. Since the fort was built with infallible defenses, its architecture is considered to be military in its style. In the entire history of Golconda fort, it has never been known to fall to enemy attack.

The colossal battlements, fortresses and gateways of Golconda Fort make it one of the most defensive and impenetrable strongholds of its time. It is situated atop a jagged terrain, which is scattered with rocks and stones. The aural features of the fort also highlight the fact that the builders of that time were technically quite advanced. The waterworks seen inside as well as below the premises of the fort further stand as a testimony to the architectural skill of the Qutab Shahi rulers. The water needs of the people living in the Golconda Fort were met through a maze of clay pipes fed by Persian wheels, located below the fort.

Golconda fort was initially built by the Kakatiya rulers as a mud fort, named Mangalawaram or Mankal, in the year 1143. However, the fort assumed its present shape when Quli Qutub Shah founded the kingdom of Golconda and turned it into a strong fortress. Much later, Naya Quila (an irregular rhombus with a rough pentagon) was added to the fort, on its northeastern side. The rugged terrain, the huge boulders and the eerie ambience surrounding the fort lend it a mystical charm.

The walls of the Golconda Fort are approximately four miles in circumference and comprise a total of 87 semi-circular bastions inside them. Apart from that, there are eight gateways and four drawbridges forming the interiors of the fort. In the year 1687, Mughal Emperor Aurangzeb invaded the fort and left it almost completely in ruins. However, one can still see some of the huge cannons mounted at a few points. Golconda Fort is basically made up of four distinct forts that have been joined together.

The lowest structure of the fort is its outermost enclosure, which is entered through the Fateh Darwaza or the Victory Gate, situated near the southeastern corner. The gate was so named after Emperor Aurangzeb succeeded in invading the fort and bringing it to ruins. It is known for its magnificent architecture and amazing acoustics. This fort comprises of a number of building inside its complex, including noble's mansions, bazaars, temples, mosques, soldiers' barracks, stables, etc.

Amongst the numerous imposing gateways of the Golconda fort, the most impressive one is the Fateh Darwaza. The darwaza, also known as victory gate, is an architectural beauty and is quite famous for its amazing acoustics. The fortresses of Golconda still house the canons that were once used by the Qutab Shahis as well as those of the Mughal forces. A canon, known as Fateh Rahbir (guide to victory), was boarded on Pethla Burj by Emperor Aurangzeb and reminds the people of his resolve to conquer Golconda.

One of the most magnificent as well as the most popular structures in the Golconda fort is the Balahisar Darwaza. The gateway stand adorned with statues of mythical beasts and lions, which seem to be guarding it. From Balahisar, one has to climb almost 380 uneven stone steps to reach the inner complex. The main complex of the fort is made up of a series of structures, ranging from those used for public audiences to the ones used as royal residences and halls. On the right hand side of the porch are mortuary baths.

These baths were meant for giving ritualistic bath to the deceased harem ladies. Then, we have the ruined Nagina Bagh, situated within an enclosed area. As you move further, you will come across offices of Akanna and Madanna, two important Hindu officials of Qutab Shah. Near the upper entrance are the ruins of Ambar Khana, along with those of Bari Baoli (step well). Then, there is a Hindu temple, belonging to the Kakatiya period and dedicated to Goddess Kali, which was carved out of a single huge boulder.

The mosque built by Taramati and a temple, Ram Mandir, are the other important buildings situated within the Golconda fort. To reach the zenana palaces (residence of women), one has to climb down a series of narrow steps. Built on huge platforms, the palaces have been adorned with high ceilings, decorative niches, alcoves and cornices, etc. Graceful ornamentation on stucco adds to the splendor of the delicate arabesques in the roundels above the side arches.

The Sound and Light Show
One of the most popular attractions of the Golconda Fort is a sound and light show, held on a daily basis, except Monday. Audio and visual effects are used to display the entire story of the Golconda Fort before the audience. The show is presented in three languages, English, Hindi and Telugu.