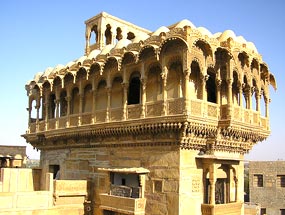 Location: Jaisalmer
Founded In: About 300 years ago

Rajasthan is home to some of the most magnificent havelis (mansions) in the whole of India. One such haveli is the Patwon ki Haveli, or Salim Singh ki Haveli, situated in the city of Jaisalmer. Infact, it is considered to be the one of the largest as well as the finest haveli of Rajasthan. The haveli has been named after Salim Singh, the prime minister of the erstwhile state of Jaisalmer. Patwon ki Haveli is beautifully constructed and stands covered with an arched roof. Exquisitely carved brackets, in the shape of peacocks, adorn its roof.

Salim Singh ki Haveli comprises of five stories presently. However, it is said that initially, the haveli was seven stories high. The two additional wooden stories made the haveli as high as the palace of the Maharaja of Jaisalmer. Upset by this fact, the Maharaja ordered the demolition of the two topmost stories. Located just below the hill, Patwon ki haveli has been separated into six apartments that are decorated with wonderful carvings. Two of these have been converted into the office of the Archaeological Survey of India (ASI).

The owners of the Patwon ki haveli still occupy some of its apartments. Beautiful paintings and dazzling mirror work festoon some of the inner walls of the haveli. Then, we have the delicately carved pillars that add to the magnificence of the haveli. One of the apartments also has gorgeous friezes painted on its walls. The corridors of Salim Singh ki Haveli are huge, its rooms massive and its hallways fascinating. Its gateways are guarded by real-looking tuskers, which have been made of sand stones.

There are a large number of balconies in the Patwon ki haveli, numbering somewhere around thirty-eight. The most interesting feature is that all the thirty-eight balconies have different designs. The frontal facade of the haveli looks very much ship-stern, which has resulted in it being referred to as the Jahaz Mahal (Ship Palace) also. The spectacular blue cupola roof dazzling with exquisite stone carvings, screen windows and magnificent murals of the Patwon ki haveli definitely make it a place worth visiting.