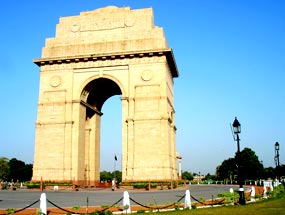 India Gate is a magnificent monument, situated near the famous Connaught Place market of New Delhi. The edifice was constructed as a commemorative structure, in the memory of the soldiers who lost their lives while fighting in the World War I. Falling on the Rajpath; India Gate stands tall at a height of 42 m. It is a very popular picnic spot and people from all over Delhi come here to enjoy and relax, especially in summer evenings. India Gate is also known as All India War Memorial.

Edwin Lutyens, who was the man behind the design and construction of the entire New Delhi, designed this monument also. The foundation stone of India Gate was laid down in the year 1921, by His Royal Highness, the Duke of Connaught. Almost ten years later, the monument was dedicated to the country, by the then Viceroy, Lord Irwin. India Gate, an "Arc-de-Triomphe", comes across as a gateway in the middle of a crossroad. It is designed in the shape of an arch, which stands on a low base of red Bharatpur stone.

The arch of India Gate mounts in stages to a huge cornice, underneath which Imperial suns have been inscribed. Both the sides have been inscribed with the word 'India', which is flanked by the dates MCMXIV (1914) on the left and MCMXIX (1919) on the right. There is a shallow domed bowl at the top, which was initially intended to be filled with burning oil on special occasions. However, this practice is not in vogue today. The names of the martyred British and Indian soldiers of the Afghan war of 1919 have been written on the Indian Gate.

Another memorial, Amar Jawan Jyoti, was added to the existing structure of India Gate after the country became independence. It is an arched memorial that has an eternal flame, which keeps on burning day and night. The everlasting flame was lighted as a mark of respect to the soldiers who laid down their lives in the India-Pakistan War of 1971. India Gate is encircled by a number of fountains, which are beautifully lit at night. The monument should be visited after dusk, when it is magnificently floodlit.