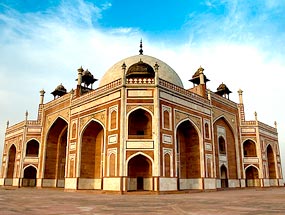 Humayun's tomb is one of the monuments in New Delhi that date back to the time of the Mughals. It is situated on the Mathura road, where it crosses with the Lodi Road. The first building to be constructed under the rule of Mughal Emperor Akbar, the tomb dates back to the year 1562. It took almost ten years to complete this magnificent monument. The architect of Humayun's tomb was Mirak Mirza Ghiyuath and it was constructed under the supervision of Haji Begum, the Persian wife of Humayun.

Heavy influence of Persian art form is clearly visible in the architecture of the Humayun's tomb of India. The tomb is situated adjacent to the Nizamuddin Dargah, the shrine of the Sufi Saint Nizamuddin Auliya. Tomb is comparable in its architecture to the mausoleums of Timur and Bibi Khanam at Samarqand. Since the tomb is situated in the heart of a geometrically arranged garden, it is also known as the Garden Tomb of Humayun. The garden is divided into four parts and is known as the Char Bagh (Char meaning four and Bagh meaning garden).

The reason for such location of the main tomb is that in Islam, jannat or paradise is a place that is set in the middle of the garden. Its garden stands divided into 36 squares, by a network of water channels and paths. The first garden tomb of India, Humayun's Tomb is surrounded by a high rubble wall. The wall is also separated into four large squares, divided by walkways and channels. Each square is then further subdivided into smaller squares by pathways. This style of gardens was introduced by Babur and went on till the time of Shah Jahan.

A long axial processional track provides entrance into the tomb. As you move further, you will come across a number of gateways. The mausoleum has an octagonal shape and its foundation platform is composed of numerous arcades. Beneath these arcades are the graves of lesser-known people of the royal court, like various nobles and workers of Humayun's period. The central chamber of Humayun's tomb is a double-storied structure and is quite huge in size. The chamber has four offsets and the facades of its two stories have cloisters.

The openings to the chamber have been covered with perforated screens. On each side of the chamber are three vigorous arches that seem to be dominating it. Amongst these arches, the central one is the highest. The main room of the central chamber houses the cenotaph of the Emperor Humayun and his Queen Bega Begum. The top of the tomb is adorned with a huge double dome, measuring approximately 42.5 m in height. The dome is made of white marble and it claims the distinction of being the first double dome in any building in India.

Humayun's tomb has been built mainly with red sandstone, with subtle use of white and black marble, mainly in the borders. There are two prominent double-storied gateways, one on the west and the other on the south, which provide entrance to the entire structure of the Humayun's tomb. However, these days, the southern gateway remains closed. In the middle of the eastern wall is the baradari (pavilion), while the hamam (bath chamber) is situated, in the center of the northern wall.

Apart from housing the graves of Humayun and his wife, Humayun's tomb also entombs a number of other Mughal personalities. Hamida Begum (Akbar's mother), Dara Shikoh (Shah Jahan's son) and Bahadur Shah II (the last Mughal Emperor) have been buried here. The tomb has been declared as a protected monument and is presently under the ownership and management of the Archaeological Survey of India (ASI). Humayun's Tomb has also been listed in UNESCO's list of World Heritage Sites.