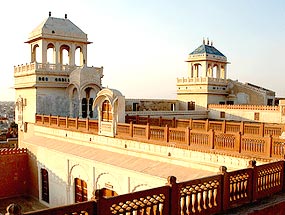 Junagarh Fort is situated in the Bikaner city of Rajasthan, quite near the public park. The fort is a splendid piece of architecture and is adorned with towers that seem to be soaring into the sky. Junagarh Fort was built under the aegis of Raja Rai Singh, a general in the army of the Mughal Emperor Akbar. The foundation of the fort was laid down in the year 1589 and it took approximately 5 years to complete the monument. Enclosing the Junagarh fort of India is a wall that is almost 986 meters in length.

A series of thirty-seven pavilions festoon the fort, which comprises of a number of palaces inside its complex. Apart from that, there are also several public court buildings and intimate zenanas (women's quarters) inside it. The zenanas were meant to hide the women of the court from the vision of the courtiers. The interiors of the Junagarh fort have been ornamented with beautiful Rajput paintings, amazing mirror-work and awe-inspiring lacquer-work. Windows and balconies, arranged in a series, lend the fort a domestic character.

The picturesque location of Junagarh Fort adds to its beauty and splendor. One of the few forts in Rajasthan to be built on plain land, it remained unconquered for close to 400 years. One of the reasons for this was its setting, which helped the fort in blending with the sandy desert, thus providing it with a natural camouflage. One of the most exquisite features of the Junagarh Fort is a raised platforms made of swords. The fakirs used to dance barefoot on this platform. Then, there is well inside the complex, which is approximately 450 feet deep.

The excellent library of the fort has a rich compilation of Persian manuscripts and ancient Sanskrit books, along with an impressive armory. There are two main entrances to the Junagarh Fort of Rajasthan. One of them is known as Karan Pol and it lies in the east, while the other is Chand Pol and it lies in the west. The moment you step in through the Karan Pol, the first sight that comes across is that of the Sati Sthambs, imprinted with symbolic hands of the royal ladies who committed the act of sati.

More sati symbols can be found on the left side of the next gate, which is called the Daulat Pol. From Daulat Pol, one reaches the Fateh Pol. All these gates have been equipped with heavy wooden doors, which have iron plating. Before the other gates were built, the main entrance to the fort used to be provided by the Suraj Pol, the Sun Gate. The other gateways are believed to have been built under the reign of Maharaja Gaj Singh. In front of the Suraj Pol lies the courtyard that houses the Joramal Temple.

On crossing the Suraj Pol, one comes across the statues of Jaimal and Patta, seated on top of elephants. Both of them were teenage generals in Maharana Udai Singh's army and fought fearlessly during the annexation of Chittor fort. These statues are believed to serve as the guardians of the fort. Different rulers added different structures to the Junagarh fort. The last structure, being the new majestic staircase, was added by Maharaja Ganga Singh. The stone carvings adorning the fort and palaces lend it a great degree of magnificence.

The numerous palaces, temples and pavilions of the Junagarh fort are built in red sandstone and have exquisitely carved windows, balconies, towers and kiosks. One must not miss the Moon Palace, which is decorated with mirrors, paintings and carved marble panels. The Phool Mahal, Flower Palace, is adorned with glasses and mirrors. Then, we have the Karan Mahal, built in the commemoration of the victory over Aurangzeb. Anup Mahal is a multi-storied palace, used as the power chambers by the rulers.

The brilliantly preserved rooms of the Anup Mahal today exhibit the treasures belonging to the Royal family. One must also visit the Ganga Niwas, Dungar Niwas, Vijai Mahal, and Rang Mahal. There is also a museum in the Junagarh fort. This museum houses an impressive collection, comprising of illuminated manuscripts, jewelry, jars, carpets, arms and weapons, treaties, decorations and 'Farmans'.