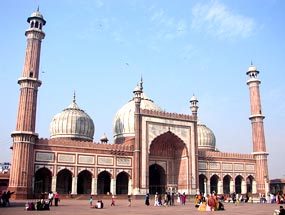 Jama Masjid, also known as Masjid-i-Jahan Numa, is the largest as well as the most significant mosque in the capital city of Delhi. The mosque dates back to the year 1656 and was built under the patronage of Mughal Emperor Shah Jahan. Its cost of construction, in those times, was approximately Rs.10 lakhs (1 million). Jama Masjid also claims the distinction of being one of the biggest as well as most famous mosques in India. It is situated at the beginning of Chandni Chowk, a very busy market of Delhi.

The courtyard of the mosque is so huge that it can accommodate approximately twenty-five thousand worshippers at a time. The northern gate of the Jama Masjid houses several relics in a closet, including a copy of the holy Koran written on deerskin. The floor plan of the Jama Masjid is quite similar to that of the Moti Masjid of Agra. However, Jama Masjid is much bigger and much impressive than its counterpart. The height at which the mosque is built further adds to its majesty and grandeur.

Three gates, one in the east, one in the north and one in the south, provide the entrance to the courtyard. One has to climb a flight of steps, built of red sandstone, in order to reach the courtyard. The northern gate comprises of 39 steps, while the southern one has 33 steps. The eastern gate of the mosque was meant for the royals and has 35 steps. In the past, these steps were used to house food stalls, shops and street entertainers. Come evening and the eastern side used to get converted into a bazaar for poultry and birds.

There was also a madrassa near the southern side of the mosque. However, it was pulled down after the 1857 War of Indian Independence. The facade of Jama Masjid faces west and its other three sides are covered with open arched porticoes. Each portico has a soaring tower-like gateway in the middle. Jama Masjid of Delhi is 261 feet (80 m) in length and rises to a height of 90 feet (27 m). The roof of the mosque stands covered with domes, which are adorned with gold on the top.

The domes are flanked on the either side by two huge minarets, standing tall at a height of 130 feet. These minarets comprise of 130 steps and are vertically striped with white marble and red sandstone. Three projecting galleries divide the minarets, which are crowned with open twelve-sided domed pavilions. Even the backside of the mosque has four minarets, but they are much smaller in size. Beneath the dome is a huge hall, with seven arched entrances that are made of marble.

As you move further, you will come across the prayer hall, which has eleven arched entrances. The central arch is quite massive and looks like a massive gateway, with slim minarets in each corner. The top of the arch is adorned with an octagonal pavilion. Covering the arched entrances are white marble structures that are four feet long and 2.5 feet wide. These structures have been inlaid with inscriptions in black marble, which provide details about the history of the Jama Masjid of India.

The foundation on which the mosque stands is about five feet (1.5 m) from the pavement of the terrace. The interiors of Jama Masjid are reached either from eastern, northern or southern entrance. The flooring of the mosque is made up of white and black marble, which creates the same pattern that is usually seen on the Muslim prayer mat. There are 899 places for worshipers, marked with the help of a thin black marble border. On the occasion of Muslim festivals of Id-ul-Fitr and Id-ul-Zoha, Jama Masjid is beautifully decorated.