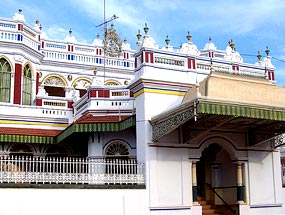 Chettinad Palace is a beautiful edifice situated in the Chettinad region, which comes under the Sivaganga district of southern Tamil Nadu. Dr Annamali Chettiyar, founder of the Indian Bank and the Annamalai University in Chidambaram, got the palace constructed. Even the design of the palace was provided by Dr Chettiyar only. An outstanding example of the Chettinad architecture, the Chettinad Palace of India dates back to the year 1912. It reflects the traditional style of architecture, which is characteristic of the region.

The construction material, decorative items as well as the furnishings that adorn the palace of Chettinad were mostly imported from East Asian countries and Europe. The marble was brought from Italy, chandeliers and teak from Burma, crockery from Indonesia, crystals from Europe and wall-to-wall mirrors from Belgium. The woodwork and stonework festooning the palace reflect heavy influence of the houses in France and other European countries. In the front of the Chettinad Palace is a huge iron-gate.

Just next to the gate is the verandah, which has now been converted into a waiting area for the visitors. The entire verandah has been laid with white marble. The palace also has a meeting hall, which is decorated with several pairs of elephant tusks. One can also see portraits of family members and colored crystal collection in the hall. The ceiling is adorned with copper roofing plates, which have artistic patterns in vegetable dye. It is said that the bricks used in making the palace were bound together with a paste of egg white, extract of an unripe medicinal fruit found in the hills of Kadukkai and lime grind.

After crossing the meeting hall, one reaches the central courtyard, which was once used for weddings and religious ceremonies. Surrounding the courtyard are pillars made of Burma teak and the floor is made of blood-red tiles and sloping woodwork. Chettinad Palace of Tamil Nadu also has a ladies hall, which has its own courtyard and dining hall. The third courtyard in the palace is bounded by a number of small rooms, which were used to store crockery, food and other kitchen items.

There are also two kitchens in this courtyard, along with servant's quarters that situated at its far end. The verandah adjoining the courtyard has numerous large stone hand-grinders and eleven firewood ovens have been built along the kitchen wall. One corner of the courtyard houses the puja room. There is also a small dining room in the Chettinad Palace for private dinners, which houses an extendable rosewood table. On the first floor are the bedrooms and living rooms, which are not open to pubic viewing.