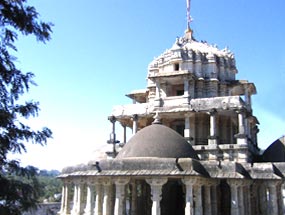 Dilwara Jain temples of India are situated at a distance of approximately 2.5 km from Mount Abu, the sole hill station in Rajasthan. One of the most popular pilgrim destinations in the state, these temples have been found to date back to somewhere between 11th and 13th century. There are five individual temples inside the Dilwara temple complex of Mt. Abu. The temples are known for their exquisite use of marble and are believed to be one of the most magnificent Jain temples not only in Rajasthan, rather the whole of India.

The gate providing entrance to the temples is splendid in its design. Dilwara Jain Temples have been enclosed inside high walls and are situated amidst a range of forested hills. The intricately carved ceilings, doorways, pillars and panels of the temples add to its beauty and splendor. The amenities provided at Dilwara Jain Temples include bathing facilities and provision of guided tours. Each of the five temples situated inside the temple complex have a unique identity. The most famous temples at Dilwara are Vimal Vasahi and Luna Vasahi.

Vimal Vasahi (Shri Adinathji Temple)
Vimal Vasahi is the temple dedicated to the first Jain Tirthankara, Shri Adinathji. The temple dates back to the year 1021 and was constructed under the patronage of Vimal Shah, a minister of Maharaja Bhimidev I of Gujarat. Situated in an open courtyard, the temple stands surrounded by a corridor. The corridor has a number of cells consisting of smaller idols of the Tirthankaras. The corridors, pillars, arches, ceilings and 'mandaps' (porticoes) of the temple have been adorned with beautiful carvings.

The huge hall of Rang Mandap has 12 decorated pillars, carved arches and a central dome. The pillars have carved images of a female playing musical instruments, along with 16 Vidhyadevis, goddesses of knowledge. Nine carved rectangular ceilings make up the Navchowki, while the Gudh Mandap has a remarkably festooned doorway. It is in this mandap that the idol of Adinath (a.k.a. Lord Rishabdev) is enshrined. The Hathishala (elephant cell), built by Prithvipal, houses a row of sculpted elephants.

Luna Vasahi (Shri Neminathji Temple)
Vastupal and Tejpal, ministers of King Virdhaval of Gujarat, got the Luna Vashi temple constructed. The temple dates back to the year 1230 and is dedicated to Shri Neminathji, the 22nd Jain Tirthankara. The ministers got the temple constructed in the memory of their late brother Luna and took heavy inspiration from the Vimal Vashi temple. The main hall, or the Rang Mandap, has a central dome that dangles from a beautifully carved pendent.

The sitting figures of 72 Tirthankaras have been arranged in one circular band and that of 360 Jain monks in another. There is also a Hathishala, adorned with 10 beautiful figures of marble elephants. The Navchowki has some intricate cutting work of marble, while the Gudh Mandap houses a black marble idol of Neminathji. To the left of the temple is Kirthi Stambha, a big black stone pillar that was constructed by Maharana Kumbha of Mewar.

Pittalhar Temple (Shri Rishabhdevji Temple)
Pittalhar Temple is also dedicated to the first Jain Tirthankara, Adinathji or Rishabhdevji. Bhima Shah, a minister of Sultan Begada of Ahmedabad is credited with the construction of this temple. Enshrined in the temple is a huge statue of Rishabhdevji, which is made up of five metals - the main one being 'Peetal' (brass). The temple comprises of the main Garbha Griha, the Gudh Mandap and the Navchowki. The Rang Mandap and the corridor of the temple have been largely left unfinished. The old idol of Rishabhdevji that was placed in the temple was replaced and reinstalled in 1468-69.

Khartar Vasahi (Shri Parshvanathji Temple)
Khartar Vasahi is a three-storied structure, constructed by Mandlik and his family. It dates back to 1458-59 and is dedicated to Lord Parshvanathji, the 23rd Jain Tirthankara. The tallest of all the Dilwara temples, Khartar Vasahi has four big mandaps on its ground floor. The outer walls of the sanctum are adorned with beautiful sculptures, depicting Dikpals, Vidhyadevis, Yakshinis, Shalabhanjikas and other ornamental sculptures.

Mahavir Swami (Shri Mahavir Swamiji Temple)
The fifth, and the last, Dilwara Jain Temple is dedicated to Shri Mahavir Swamiji. It was constructed in the year 1582 and enshrines Lord Mahaveer, the 24th Jain Tirthankara. The artists of Sirohi beautifully painted the upper walls of the porch in 1764.