Indian Weddings Home Remedies Ayurveda Vastu Yoga Literature
Old Fort is one of the most magnificent monuments of Delhi. Get information on Purana Quila of Delhi, India.
Home : Monuments of India : Purana Qila 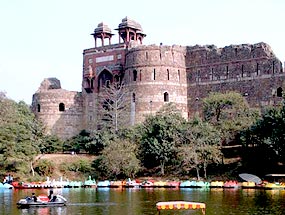 Old fort of Delhi is situated near the Pragati Maidan area of the city. It is believed that the site where the fort is built used to house the capital of Pandavas, of the great Indian Epic Mahabharata. Old fort has served as the seat of administration for numerous emperors who have ruled over Delhi, including the legendary ruler Prithviraj Chauhan. Even though the citadel is now in ruins, its splendor is still not fully lost. The initial fort was constructed by Sher Shah Suri, after demolishing Dinpanah, the city of Humayun.

The corners of the Purana Quila of Delhi, along with its western wall, have strong fortresses. Its ramparts are approximately 2 km in length and are flanked by three double-storied main gates the north, south and west, with 'chhatris' on top. The northern gateway of the fort is known as the 'Talaqi-Darwaza' i.e., the Forbidden Gate. It stands adorned with exquisite marble carvings, depicting lions engaged in fierce battle with a man. The exteriors of the gate were once ornamented with colored tiles, whose remnants are still visible.

It is said that though Sher Shah laid down the foundation of Old Fort, he could not live to see it being fully completed. The fort was finished, or at least renovated, by Humayun when he recaptured Delhi. This is the reason why its southern gate is known as Humayun Darwaza. Encircling the northern as well as the western side of the fortress is a moat. Along with that, there is also a causeway that links it with the main land. The excavations carried out at the fort some time back came up with relics that date back to around 1000 BC.

These findings confirm the belief that Purana Quila was built on the site of Indraprastha, the capital of Pandavas. The relics, including punch-marked coins, human and animal terracotta figurines and inscribed terracotta seals, seem to belong from the Mauryan period to early Mughal period. Out of the few buildings of Old Fort that have withstood the travails of time, one is the mosque built by Sher Shah. It dates back to the year 1541 and is built as per architectural styles, ranging from the Lodi style to that of the Mughals.

Then, we have the Sher-Mandal, a double-storied octagonal tower that has been built of red sandstone. There is an octagonal chhatri, festooned with glazed tiles and carved and painted plasterwork on the interiors, which seems to be crowning the tower. It is believed that the tower used to serve as the library of Emperor Humayun. The same place also served as his deathbed, when he fell down from it and died. One of the main attractions of Purana Quila is a Sound and Light Show, where 5000 years of history of Delhi is displayed.

As you enter the main gate of the Old Fort, you will come across a small archaeological museum. It houses numerous artifacts belonging to the Mughal period. Then, there are relics belonging to the Mahabharata era, including archaic pottery and other pieces of art and handicrafts. Apart from these artifacts, the other items excavated by the Archaeological Survey of India comprise of material belonging to the Gupta period (like coins) as well as post-Gupta period. The main attractions near the Old Fort include a lake with boating facilities and a Zoological Park.