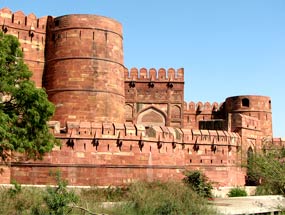 Agra Fort, situated on the banks of River Yamuna, dates back to the 16th century. Mughal Emperor Akbar laid down the foundation of the fort, in the year 1565. As many as 4000 builders were involved in the construction of Agra Fort for a period of eight years and completed it in 1573. Agra Red Fort has been built in the shape of a crescent, which is flattened on the east with a long wall that faces River Yamuna. Built out of red sandstone, the fort lies 2 km to the northwest of the magnificent Taj Mahal.

The Red Fort of Agra stands enclosed within massive double walls, which rise to a height of 69 ft and have a circumference of 2.5 km. The walls have two entry gates, known as the Delhi Gate and the Lahore Gate or Amar Singh Gate. The Delhi Gate initially provided entrance to the fort and led to the inner portal, called the Hathi Pol or Elephant Gate. Encircled by a moat, Agra fort has a number of buildings within its complex and is a city within itself. There are a number of palaces inside the fort complex, along with numerous splendid mosques.

Presently, entrance to the fort has been limited to the Amar Singh Gate only. However, the general public is granted access from the southern part of the Agra Fort, which provides admission to almost all the buildings. Of the numerous structures inside the fort complex, the most popular ones are Jehangir Mahal, Khas Mahal, Diwan-i-Aam and Sheesh Mahal.

Jehangir Mahal
On entering the Agra Red Fort through the Amar Singh Gate, the first building one comes across is the Jehangir Mahal. The mahal or palace stands at the end of a lawn and was intended to serve as the residence of Akbar's son, Jehangir. It holds the distinction of being the largest private residence in the fort and has been built as per a blend of Hindu and Central Asian architecture. The inner courtyard has a two-story facade of beautiful halls with exceptional carvings. The verandah on the eastern front has slender pillars and faces the Yamuna.

Khas Mahal
A white marble monument, Khas Mahal was built by Shah Jahan in 1637. It has been built as per Islamic-Persian architecture and has three pavilions, along with a magnificent fountain. Two of the pavilions are golden in color, out of which one is believed to be adorned with gold leaf.

Musamman Burj
Musamman Burj lies to the left of the Khas Mahal and is an octagonal tower with an open pavilion. Shah Jahan got this tower built for his wife, Mumtaz Mahal. Musamman tower is made of marble lattices and is adorned with a marble dome. There is also a verandah, with a carved fountain in the center. It was here that Shah Jahan spent the last few years of his life, after being captured by his son Aurangazeb.

Diwani-i-Khas
Shah Jahan got the Diwan-i-Khas, the hall of private audience, constructed in 1636-37. It was here that he used to receive kings, dignitaries and ambassadors. A three-sided pavilion, it has marble throne terrace, where a pair of thrones have been kept. Presently, general public is not allowed inside the Diwan-i-Khas.

Sheesh Mahal
Sheesh Mahal, the Glass Palace, is situated opposite the Mussaman Burj and below the Diwan-i-Khas. The royal dressing room of the Mughals, this palace has two large halls of equal size and has been inlaid with small mirrors.

Macchhi Bhawan
Macchhi Bhawan, a grand enclosure opposite Diwan-i-Khas, was used for harem functions. The pools and marble fountains, which once adorned the enclosure, were taken by Jat Raja Surajmal to his Deeg palace.

Hammam-i-Shahi
Hammam-i-Shahi, or the Shah Burj, is an apartment that was attached to the residential quarters and served as a summer retreat.

Diwan-i-Aam
Diwan-i-Aam, the hall of public audiences, is a red sandstone monument constructed by Shah Jahan. The emperor used to meet his officials as well as the commoners here only. The famous Peacock Throne of Shah Jahan was kept here only.

Nagina Masjid
Nagina Masjid, the Gem Mosque, was the private mosque of Shah Jahan, with typical cusped arches for the ladies of the court.

How to Reach Agra Red Fort
By Air: The airport of Agra is well connected with almost all the major cities of the country.

By Rail: Agra is a major railway junction and has several railway stations, with the Agra Cantonment Railway station being the main one.

By Road: Agra has regular bus services to almost all the cities in UP as well as other states.