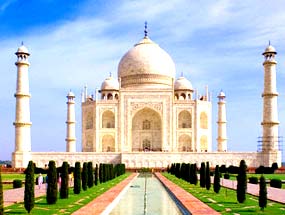 Taj Mahal, the 'Epitome of Love', is the most prized possessions of the Indian subcontinent. The magnificent monument is renowned throughout the world for its exquisite architectural beauty. It occupies a place in the Seven Wonders of the World and has also been declared as a World Heritage Site by UNESCO in 1983. Tajmahal is situated in the Agra city of India, popularly known as the 'City of Taj'. Located on the banks of the Yamuna River, the monument is built entirely of white marble.

Taj Mahal is said to be "the jewel of Muslim art in India and one of the universally admired masterpieces of the world's heritage". It is the mausoleum of Mumtaz Mahal, constructed by her husband, the Mughal Emperor Shah Jahan. The construction work on the monument was started in the year 1632 and it took approximately seventeen years to complete it. Though Ustad Ahmad Lahauri is believed to be the architect of Tajmahal, there is no consensus on the issue. Approximately 20,000 laborers, engineers and architects were involved in its construction.

The stones that were used in building Taj Mahal were brought from as far away as Tibet and Sri Lanka. The monument has been built as per the Mughal architectural style, which draws heavily from Persian, Turkish, Indian and Islamic styles. When you look at the Taj mahal of Agra, the first feature that strikes you is its huge bulbous dome. It is approximately 58 feet in diameter and 213 feet in height. Constructed out of white marble and inlaid with semi-precious stones, it comes across as a splendid structure.

The marble and stones adorning the dome give Taj different hues at different times of the day. The dome stands surrounded on its four sides by four soaring minarets, each of them atleast 40 meters high. The minarets have been built in such a way that they slightly slant to the outer side and taper down with height. On one side of the Taj Mahal stands a mosque, while on the other is the Naqqar Khana. The main mausoleum is built on an elevated, square platform with four abridged corners, which seem to be forming an unequal octagon.

The concept of interlocking arabesque architecture seems to be used throughout the Taj. Going as per the concept, each feature of the monument seems to have its own identity, yet merges harmoniously with the main edifice. The tombs of Shah Jahan and his wife Mumtaz Mahal have been situated inside the Taj Mahal, in a shadowy burial crypt. The main chamber is situated just above these crypts and contains the false tombs. The chamber is surrounded by perforated marble screens, through which the sunlight comes inside.

The surface of the Taj Mahal stands ornamented with exceptionally beautiful calligraphic work. The verses and passages from the holy book of Koran have been inscribed on the walls of the monument, by inlaying jasper in the marble panels. Amanat Khan, a Persian calligrapher, can be credited with inscribing the calligraphy in an illegible Thuluth script. Standing as a proof of his work are numerous panels, which bear the signatures of the calligrapher.

Taj Mahal is situated in the northeast corner of a sprawling garden, which has a huge marble tank in its center. The entire area, right from the main gateway to the base of the Taj, is covered by the garden, known as the Charbagh. Taj garden has been designed as per the Persian style and stands divided into four parts. In each of the square, we can see 16 flowerbeds that have been divided by elevated passageways. The trees planted in the garden are either that of Cyprus (which symbolize death) or of the fruit bearing type (which symbolize life).

Taj Mahotsav
Every year, Taj Mahal plays host to the Taj Mahotsav, which is celebrated in the month of February. The festival is organized by the Uttar Pradesh Tourism and lasts for a period of ten days. The main aim behind the Taj Mahotsav is to promote the arts, crafts, culture, cuisine, dance and music of the state. It is held at Shilpgram, situated very near to the Taj Mahal.