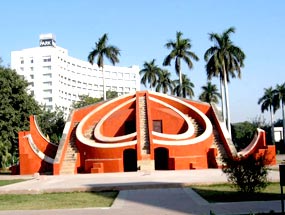 Jantar Mantar of New Delhi is one of the oldest astronomical observatories in India as well as the world. It is situated at a distance of approximately 250 meters from the famous shopping center of Connaught Place. The observatory dates back to the year 1724 and was built under the patronage of Maharaja Jai Singh II of Jaipur. He built the Jantar Mantar of Delhi after studying Hindu, and Muslim astronomical works thoroughly. It serves as perfect example of the technological innovations of that time.

Jantar Mantar of Delhi is one of the five observatories that were built by Sawai Jai Singh II. The other four observatories are located in the cities of Jaipur, Varanasi, Ujjain and Mathura. All these observatories were built somewhere between 1724 and 1730. There is a very interesting story behind the establishment of the Jantar Mantar of Delhi. Jai Singh was very much interested in two things - art and science, mainly astronomy. He once heard an argument between the Hindu and Muslim astrologers at the court of Muhammad Shah.

They were fighting over the issue of certain planetary positions. The positions were to be known with accuracy so as to arrive on an auspicious hour for the emperor to go on a mission. Jai Singh offered his help in rectifying the available astronomical tables. The Mughal emperor readily accepted the offer and this incident led to the construction of Jantar Mantar in Delhi, where the movements of the celestial bodies, including sun, moon and planets could be observed. There are six main instruments inside the Jantar Mantar Observatory.

Samrat-Yantra
The most important instrument kept inside Jantar Mantar is Samrat-Yantra, a huge sundial. It is an equinoctial (equal hour) dial, which comprises of a triangular gnomon. The hypotenuse of the gnomon is parallel to the earth's axis. Either side of the gnomon is attached with a quadrant of a circle, which is parallel to the plane of equator.

Jai Prakash Yantra
Jai Prakash Yantra is used to determine the position of Sun, along with other heavenly bodies. This instrument was designed by Jai Singh and is made up of two concave hemispherical structures.

Misra Yantra
Misra Yantra, a combination instrument, is sited to the northwest of Ram Yantra. The instrument is so called since it comprises of a number of instruments in one. It is much similar in appearance to the stylized 'namaste', the Indian form of greeting. The Niyta-Chakra of Misra Yantra indicates Greenwich, Zurich, Notkey (Japan) and Serichew (Pacific Ocean) meridians.

Agra Yantra
Agra Yantra is the second quadrant on the west side of the building. It is not known for what purpose was the instrument used.

Almost all the instruments mentioned above are not functional today. This is because the markings as well as the floor measurements of the instruments have become distorted over time. A temple of Lord Bhairava, probably constructed by Maharaja Jai Singh, is situated to the eastern side of the instruments. Surrounding the instruments are blooming gardens, which are adorned with seasonal flowers. Jantar Mantar is maintained by the Archeological Survey of India (ASI) and has been declared as a protected monument under the ASI Act.