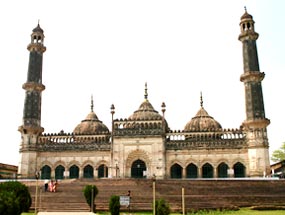 Location: Lucknow, Uttar Pradesh
Founded By: Nawab of Awadh, Asaf-ud-Daula
Founded In: 1784
Best Time to Visit: Throughout the year (Non-Muslims are not allowed)

Bada Imambara is a huge complex, situated in the old city of Lucknow. One of the most famous monuments of the city, the Imambara is significant not only from historical, but also cultural and heritage point of view. The complex dates back to the year 1784 and was founded by the then Nawab of Awadh, Asaf -ud-Daula. Bada Imambara of Lucknow is neither a mosque, nor a mausoleum. Rather, it is a complex that is made up of a number of buildings, including Asfi mosque, the Bhul-Bhulaiyah (the maze) and a summer palace with running water.

The design of the Bada Imambada of India reflects an amalgamation of Rajput and Mughal architectures, with strong Gothic influences. Its interiors are quite impressive as well as elaborate and the vaulted hall situated inside the complex is believed to be one of the largest apartments of its kind in the world. The halls as well as the vaults of the Imambara also display a strong Islamic influence. The reason for the construction of the Bada Imambada tells us a tale of the compassion and humanity of the Nawab.

Nawab Asaf-ud-Daula came to Lucknow in 1777 and in 1784, a harsh famine hit the city. In order to provide foodstuff to the famine-hit people, the Nawab decided to build the great Imambada, on food-for-work basis. He employed approximately 22,000 people to work day and night. Around one-forth of the work done during the day was demolished at night against payment. Thus, there was always the scope of work for the people. It is also said that before distributing muskmelons amongst the poor, Asaf-ud-Daula used to get them inserted with jewels.

The Imambara complex comprises of a great hall, situated at the end of an impressive courtyard. The courtyard is reached through two magnificent triple-arched gateways and is approximately 49.4 m in length and 16.2 m in width. The largest hall in Asia, without any external support of wood, iron, or stone beams, the hall has a ceiling that is more than 15 m high. The roof of the hall is said to be 16 feet thick, with a weight of nearly 20,000 tons. People marvel at this roof, which has been built without girders or beams to uphold it.

The same roof covers three halls in all, the Persian Hall, the China Hall and the Indian Hall. The Persian Hall is the central hall, which is quite large in size. The China Hall is of an interesting shape, being square at ground level, octagonal at mid-height and 16-sided at the top. The India Hall is in the shape of a watermelon. The architect of the Bada Imambara is believed to be a Persian, by the name of Kifait-ullah. The acoustics of the hall are such that one can even hear the strike of a matchstick across the length of the hall.

The top terrace is reached through a narrow flight of steps and has a tangled set of passages. These passages were designed to confuse even the most alert minds, thus creating a maze called Bhul Bhulaiya. The main reason for the construction of the maze was to support the thick walls of the Imambada. The terrace of the monument provides a magnificent view of the old Lucknow, along with its numerous mosques and minarets. A number of monuments are situated inside the complex.

Mosque
Asfi mosque is situated inside the courtyard of the Bada Imambara and is an extremely graceful monument. A grand flight of steps leads to the paved floor of the mosque.

Baoli (Step Well)
People find the five-storied baoli (step well) the most fascinating structure inside the complex of the Imambada. The baoli belongs to the pre-Nawabi era and is known as the Shahi-Hammam (royal bath). The water needs of the baoli are met by the river Gomti. Only the first two stories of the baoli are above water, the rest three stories remain permanently under water.