Indian Weddings Home Remedies Ayurveda Vastu Yoga Literature
Rumi Darwaza Lucknow was built in the year 1784. We have written this article to tell you more about the Rumi Darwaza of India.
Home : Monuments of India : Rumi Darwaza 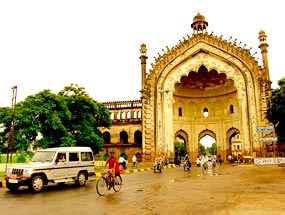 Rumi Darwaza is a huge gateway situated in the city of Lucknow, near the Bada Imambara. An architectural beauty, it is counted amongst the most popular attractions of Uttar Pradesh. The gateway dates back to the year 1784 and was constructed under the patronage of Nawab Asaf-ud-Daula. One of the most imposing structures in India, Rumi Darwaza has been built as per the Awadh architectural style. Known by the name of Turkish Gateway also, it is said to be exactly similar in design to a gateway in ancient Constantinople (Turkey).

The term "Rumi' has been derived from the word Rome, which is another name of Istanbul, the capital city of Eastern Roman Empire. Since Constantinople was earlier known as Istanbul, the name of the gateway was kept in Hindi as the 'Rumi Darwaza'. The gateway is huge in size and rises to an astounding height of 60 feet. An octagonal chattri adorns the uppermost part of the Rumi Darwaza and is beautifully carved. The chattri can be easily reached with the help of a staircase.

In the past, a huge lantern was kept on the top of the Rumi Darwaza, with the purpose of lighting it up. The gateway used to look magnificent under the light of the lantern. The sides of the arch have been decorated with carved flower buds, out of which little jets of water used to rush out. This made the Rumi Darwaza look like the gateway to Paradise. Just like Bada Imambara, the gate was also founded under the 'Food for Work' program. At one point of time in the past, Rumi Darwaza used to serve as the entrance to the walled city area of Lucknow.