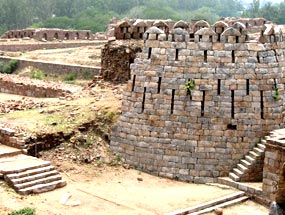 Tughlaqabad fort, which once served as the symbol of the power of Tughlaq dynasty in Delhi, lies completely in ruins today. It is situated on the Qutub-Badarpur Road in the city, near Qutub Minar Complex. It took approximately four years to build this monument, on which construction work was started in the year 1321. The person to be credited with the construction of the Tuglaqabad fort is Ghiyas-ud-Din Tughlaq, the founder of the Tughlaq dynasty. The fort, which once made up one-third of the capital city of India, stands towering on a rocky hill.

The main reasons behind the construction of Tughlaqabad fort were to protect the empire from the incessant threat of Mongol attacks from the northwestern borders and serve as its capital. The fort stands adorned with enormous ramparts, fortifications and the colossal stonework. One look at the fort reminds us of the architectural talent of the Indian craftsmen of those times. A number of monuments have been built within the boundaries of the gigantic fort of Tugluqabad.

These include outstanding palaces, impressive mosques as well as splendid audience halls. The ramparts and bastions of the fort rise to a height of somewhere between 15 and 30 meters. They have been made out of huge blocks of stone and are as much as 10 meters thick at certain points. The city of Tuglaqabad was situated on the eastern outskirts of the fort. On its southern side, we can see the mausoleum of Ghiyas-ud-din Tughlaq, built by the ruler himself. The tomb is situated in a courtyard and has been built as per Indo-Islamic architecture.

Tughlaqabad Fort comes across as octagonal structure, with a border that is almost 6.5-km long. The fort has been divided into three parts. The eastern segment, on the Qutub-Badarpur road, is a rectangular area surrounded by high walls and ramparts. The western side once used to house a number of palaces. In the southern side of the Tughlaqabad Fort is a huge reservoir, which is linked with Ghiyas-ud-Din's tomb by a walkway.

The south eastern-corner of the fort has a mound that reaches the fortress of Adilabad. There are a number of hose gates near the mound, which were used for the purpose of controlling water for irrigation purposes. Apart from the Bijai-Mandal, a tower, Tughlaqabad Fort also houses the remnants of several halls and a long underground passageway. Even though the fort in now mostly in ruins, it stands as a testimony to the lost glory of the Tughlaq dynasty.