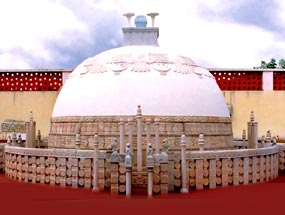 Amaravati is a small town situated in the Guntur District of Andhra Pradesh, on the embankment of River Krishna. It was the capital of Satavahanas from 2nd century BC to 3rd century AD and is also the excavation site of an ancient Buddhist Stupa, constructed during the rule of Emperor Ashoka. Kushanas of Mathura were the ones to introduce the principles and teachings of Buddhism in Amravati town, near Chennai. Amravati stupa was founded by an emissary of Emperor Ashoka and its construction got completed around 2000 years ago.

Amravati Stupa illustrates Lord Buddha in a human form and He is shown subduing an elephant. It is taller than the Sanchi stupa and has 95 ft high platforms, extending in the four cardinal directions, along with a huge circular dome. The carved panels of the stupa depict the life story of Lord Buddha. The entire stupa stands adorned with limestone reliefs and freestanding Buddha figures. With the decline of Buddhism in India, the stupa also faced neglect and got buried under rubble.

A 14th century inscription in Sri Lanka mentions that some repairs were made to the stupa. However, it were the European scholars, like Sir Walter Smith, Robert Sewell, James Burgess and Alexander Rea, who excavated the site and discovered the sculptures that once adorned the stupa, which include bas-relief medallions and paneled friezes. Presently, the stupa has been kept in the Government Museum of Chennai.