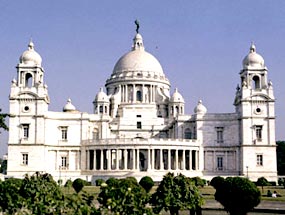 Victoria Memorial, built in the memory of Queen Victoria, is situated in Kolkata, the capital city of West Bengal. The foundation stone of the memorial was laid down in the year 1906, by the 'Prince of Wales'. Apart from being a memorial, the monument was intended to serve as a tribute to the success of the British Empire in India. Lord Curzon was the one who envisaged the main idea of the erection of the Victoria Memorial Hall, which was to serve as the architectural culmination of the Kolkata city.

Even the classical style of the monument was specified by Lord Curzon, the then Viceroy. However, it was Sir William Emerson, a renowned architect, who laid down by the actual plan of the memorial. The design of the structure represents an amazing fusion of British and Mughal architecture. White Makrana marbles were used in the construction of Victoria Memorial Hall and the building was inaugurated in the year 1921. The massive hall is 338 by 228 feet and rises to a height of 184 feet.

A very interesting fact related to the memorial is that money of the British government was not used in its construction at all. Rather, the British Indian states, along with the individuals who wanted some favors from the British government, were the main contributors towards the cost of building the Victoria Memorial Hall, which came to somewhere around 10 million. The memorial is massive in its size and stands enclosed within blooming gardens that spread over to an area of 64 acres.

The top of the memorial stands adorned with a sixteen-foot tall bronze statue of Victoria. It is mounted on ball bearings and rotates with the wind. Presently, the Victoria Memorial houses a museum, where one finds an amazing compilation of the memorabilia of Victoria, paintings of British rule and other exhibits. The collection includes weapons, sculptors, paintings, maps, coins, stamps, artifacts, textiles, etc. The Royal gallery of the Victoria Memorial houses some splendid portraits of Queen Victoria and Prince Albert.

Then, there are a number of paintings that illustrate the life of the Queen. However, the most remarkable painting is the one made by the Russian artist, Vasseli Verestchagin. He has portrayed the scene of the state entry of Prince of Wales in Jaipur, in 1876. After India gained independence in the year 1947, certain additions were made to the Victoria Memorial. These additions comprised of National Leader's Gallery, containing the portraits and relics of the freedom fighters. One must visit the memorial at night, when it is beautifully illuminated.