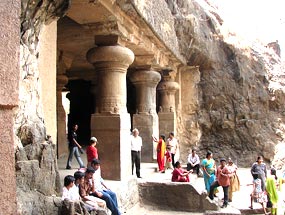 Elephanta Caves are situated in the Elephanta Island hills, which lie almost 11 km to the northeast of the Apollo Bandar of Mumbai. The caves cover an area of 7 km in circumference and lie 7 km from the shore of the mainland. The island is named after a gigantic elephant statue that was found near its landing area. Presently, the elephant statue has been kept in the Jijamata Garden of Mumbai. Numerous dynasties are said to have occupied the Elephanta Island, namely Konkan-Mauryas, Trikutakas, Chalukyas, Silaharas, Rashtrakutas, Kalyani Chalukyas, Yadavas, Muslim rulers of Ahmedabad and the Portuguese.

Even the Marathas had control over the island, from whom it passed into the hands of the British. Elephanta Caves of Maharashtra have been carved out of a single piece of rock. The main features of these caves include columns, internal spaces and beautiful images. Only some of the rock surfaces here have been finished, while some are nothing more than unfinished bare rocks. The Elephanta Caves date back to somewhere around 6th-7th century. There are a total of seven cave excavations in the Elephanta group.

The most impressive amongst these caves is the Mahesa-murti cave (cave number one). This cave represents advanced Brahmanical rock-cut architecture. Even the beautiful and vivacious sculptures of cave number one are worth having a look. The cave is very much similar to the Dumar Lena (Cave 29) of Ellora. The main entrance of cave number one is situated in the northern side. Apart from that, there are two openings on the eastern as well as western side also. There is a central hall in the cave, which is adorned with six rows of pillared columns.

In each of the row, there are six columns. The only exception is the western corner, where a lingam has been enshrined. There are also three large square recesses, divided by pilasters, and each of them has been illustrated with an enormous image of the Dvarapala. The eastern panel is ornamented with the image of Ardhanarisvara, a form of Shiva with the combined energies of both male and female. On the western panel, one can see the carved figures of Lord Shiva and His consort, Parvati, in which both of them are playing chausar.

The central recess is known for housing the Mahesa-murti, the most illustrious as well as most impressive sculpture of this period. The sculpture is gigantic in size and represents the three different forms of Lord Shiva. The first form is that of Aghora, which symbolizes a tumultuous and formidable Lord Shiva. The second form is of Tatpurusha, who is benevolent and is in a meditative posture. The third, and the last, form is that of Vamadeva, signifying a mild agreeable and endearing Lord Shiva.

Other prominent panels inside the main cave are those of Andhakasuravada Murti, the cosmic dance of Nataraja, Kalyanasundara murti, Gangadhara Murti, Ravana shaking Kailasa and Shiva as Lakulisa. You should also see the panel near the eastern opening, which illustrates Saptamatrikas. The Elephanta caves of Maharashtra are believed to be the abode of Lord Shiva.