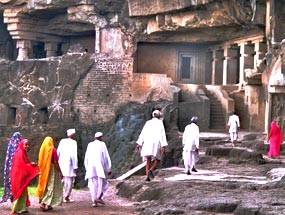 Ajanta Caves are rock-cut cave monuments, situated near the Aurangabad city of Maharashtra. The caves date back to the 2nd century BC and were declared a UNESCO World Heritage Site in the year 1983. The caves of Ajanta are adorned with both paintings as well as sculptures, which are considered to be masterpieces of Buddhist religious art. Located just outside the Ajintha village of Aurangabad district, the caves lie in a wooded and jagged ravine, which is almost in the shape of a horseshoe.

As per the Archaeological Survey of India, there are twenty-nine caves in toto. Ajanta cave temples were excavated from the southern side of the precipitous scarp, by cutting the ravine. The altitude of the caves varies from 35 to 110 ft, above the bed of the stream. There are a number of viharas (monastic halls of residence) and chaitya grihas (stupa monument halls) inside the Ajanta Caves of India. These viharas and chaityas grihas were cut into the mountain cliffs in two distinct phases.

The first phase of the formation of the caves relates to the time when Hinayana sect of Buddhism was in force. Often referred to as the Lesser Vehicle of Buddhism, the Hinayana Sect believes in the symbolical worship of Lord Buddha. Since the sect is not averse of Buddha statues, one can see a few of them in the caves belonging to the phase of Hinayana sect, namely cave numbers 9, 10, 12, 13 and 15A. Lord Buddha has been enshrined in these caves in the form of a stupa or a mound.

Some of the viharas have a simple veneer, while some are much more elaborate; some have a porch, while some are without one. The early viharas were more like halls of residence and congregation and did not have shrines. The later ones, however, had shrines in the back walls. The shrines were built to house the image of the Buddha, often seated in the 'dharmachakrapravartana' mudra i.e., the teaching mudra. The latest caves of Ajanta even have sidewalls, along with the porch. Numerous viharas situated inside the Ajanta cave temples stand adorned with carvings, along with paintings on the walls and the ceilings.