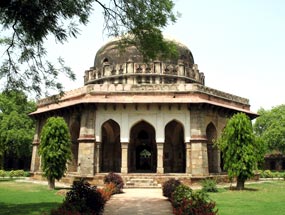 Lodi Tomb is one of the popular monuments of Delhi, situated inside the premises of the picturesque Lodi Garden. The tomb is situated in the southern portion of New Delhi, adjacent the Indian International Center. The tomb is the last resting place of one of the great rulers of India, Sikandar Lodi. However, it is not the only tomb built inside the Lodi Garden. Apart from Lodhi Tomb, the garden also houses the tomb of Muhammad Shah, Shish Gumbad and Bara Gumbad.

It is believed that all of these tombs are the snippets of a city, which was supposed to have been built here. Lodi Tomb is octagonal in shape and is built as per the exquisite Mughal architectural style. Infact, the tomb is said to have served as revival of the Sayyid architectural style, which boasted of octagonal plan, deep veranda and tall arches. The tomb of Sikandar Lodhi is adorned with a double dome on top and is entered from a huge gateway, which faces south.