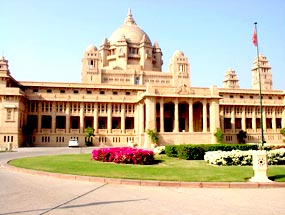 Umaid Bhawan Palace is one of the most popular edifices of the Jodhpur city of Rajasthan. It is situated on top of a hill known as Chittar Hill, which is believed to be the highest point in the city. It is because of this location that the Umaid Bhawan Palace was called the 'Chittar Palace' at the time of its construction. The foundation of the palace was laid down by Maharaja Umaid Singh, in the year 1929. However, it took approximately sixteen years to complete the construction of the palace.

Umaid Bhawan Palace was amongst the last palaces to be built in India. At the same time, it was also one of the last structures built in Rajasthan, on 'food for work' basis, for drought relief. It is said that approximately 5000 men were employed in the construction of the Umaid Bhawan Palace of Jodhpur. An interesting feature of the palace is that no mortar or cement was used in its construction. Rather, carved stones were used and joined together by a system of interlocking positive and negative pieces.

When it was constructed, Umaid Bhawan Palace claimed the distinction of being the largest private residence in the world. It has a total of 347 rooms and stands ornamented with 110 feet high central dome. The architect of the palace was H V Lanchester and he designed it as per the Indo-Art-Deco style of architecture. During that time, the cost of construction came to somewhere around one crore (ten million) rupees.

The embellishments for the interiors of the Umaid Bhawan Palace were to be imported from Umaid Bhawan Palace. However, the ship bringing the same was attacked by Germans and got sunk in the sea. Thereafter, Maharaja Umaid Singh employed Stefan Norblin, a Polish interior designer, to design the interiors. The tradition of medieval palaces, where there are separate sections for males and females with separate entrances, was fully maintained. The palace is presently under the ownership of His Highness Gaj Singh, Maharaja of Jodhpur.

Umaid Bhawan Palace has now been divided into three parts. One part serves as the residence of the royal family, the second houses a museum, while the third one has been converted into a five-star hotel. Umaid Bhawan Museum displays a rich collection of pictures, arms, swords, stuffed leopards, clocks and other items belonging to the royal family. It is open to the general public from 10:00 am to 4:00 pm daily, except Sunday.