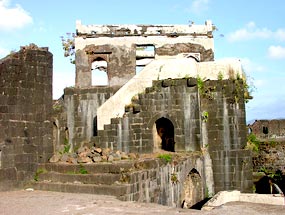 The Murud town of Maharashtra used to serve as the capital of the Siddi rulers of Janjira. Today, the most popular attraction of the town is the Island Fort of Murud-Janjira. Janjira Fort is situated 2 km inside Murud and is one of the most prominent sea forts of India. The walls of the fort rise to a height of 40 ft and, even after so many years of bashing by sea waves from all the four sides, stand as sturdy as ever. It is said that Janjira Fort could not be captured by any enemy for a period of almost 350 years.

Mighty rulers like Shivaji, Sambhaji and the Peshwas tried to take over the fort. Even the Marathas, British or Portuguese could never be successful in occupying it. Janjira Fort was initially a structure of wood made by the Murud fishermen, with the purpose of protecting their village from the sea pirates. It was Buran Khan, the minister of Nizamshah (the ruler of Ahmed Nagar), who got the wooden structure demolished. Then, he laid down the foundation of Janjira Fort, one of the most unassailable stone forts of India.

Numerous towers and turrets adorn the fort. These towers and turrets were used for keeping huge guns, in preparation of any attack by the enemies. In the past, Janjira Fort was the proud owner of approximately 500 canons. However, today, only a few of them have survived. The most famous canons kept inside the fort are Kalal Bangadi, Chavari and Landa Kasam. The interiors of the fort comprise of two huge water tanks. Then, there are a number of tombs inside the fort that are worth having a look at.

The main entrance of Janjira Fort is adorned with a stone carving, which illustrates six elephants trapped by a single tiger. This carving is believed to be a symbol of the bravery of the Siddi rulers. There are also two sweet water lakes inside the fort, which exist even in the present times. Janjira fort comprises of nineteen burjs in toto, with each burj bearing huge guns on it. Apart from the fort, they are a number of other structures in the Murud town that are worth a visit. Some of theses are situated near the Janjira fort itself.

To the northwest of Janjira Fort, we see the Padmadurg Fort that was built by Shivaji, one of the greatest rulers of Maharashtra. Though not as massive as Janjira, it is quite impressive. To the north of Murud, we have the Shrine of Dattatreya, representing the Trinity of Lord Brahma, Lord Vishnu and Lord Shiva. Tourists going to Murud should also visit the Palace of the Nawab as well as the Janjira Caves. Last but not the least, there are the two virgin beaches of Nandgaon and Kashid, situated a few kilometers from Murud.