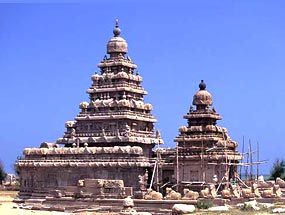 Mahabalipuram is a small city, situated at a distance of approximately 50 km to the south of the Chennai city of Tamil Nadu. It once served as port city of the Pallava rulers and is adorned with magnificent architectural beauty. The major attractions of the city are its numerous temples and rock cut sculptures, which present a wonderful amalgamation of history and natural beauty. Almost all the monuments in Mamallapuram have been built as per Dravidian temple architecture and Pallava art.

The Shore temple of Mamallapuram was constructed under the aegis of Rajasimha and date back to the 7th century AD. The period when the temple was built is believed to represent the pinnacle of Pallava art and architecture. Shore Temples of India are perched on a rocky protrusion, which looks over the shoreline. The temple was built in such a way so as to light it up with the rays of the rising sun and to illuminate the waters after dark. Thus, the layout of the temple is quite different from the usual temples.

Shore Temple of Mahabalipuram also claims the distinction of being the first Pallava structure to be constructed of stone, rather than being carved out of stone. The shikhar (spire) of the temple is of a towering, tiered style, and not rounded like those of the vihara design. The main shrine inside the complex is situated in the east and faces the sea. Behind this are the gateway, the forecourt and the assembly hall of the temple. There are shrines dedicated to both Lord Shiva and Lord Vishnu in the Shore temple.

The sanctum sanctorum as well as the smaller temple in the west is dedicated to Lord Shiva. The walls surrounding these shrines are adorned with the images of Nandi Bull. Between these two shrines, there is a third shrine also, which is dedicated to Lord Vishnu. The idol of the Lord illustrates Him as reclining on the serpent Seshnag, a Hindu symbol for consciousness. The sculpted panels of this shrine portray vigorous earthly beauties, which seem to be imbibed with life and display breathtaking beauty.