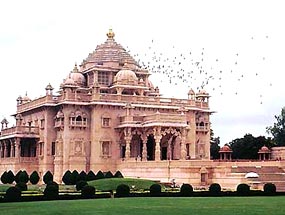 Akshardham Temple is situated in the Gandhinagar district of Gujarat, which stands bounded by Ahmedabad city in the southwest. One of the largest temples of Gujarat, Akshardham is a place where you can find a rare amalgamation of devotion, art, architecture, education, exhibitions and research. The temple has been constructed under the aegis of Bochasanwasi Akshar-Purushottam Swaminarayan Sanstha (BAPS) of India, which was and is headed by Pramukh Swami Maharaj.

Akshardham Swaminarayan Temple of Gujarat was inaugurated on 2nd November 1992. The inauguration ceremony of the temple coincided with the centenary celebrations of Yogiji Maharaj and was conducted by Pramukh Swami Maharaj only. Almost all the tourists coming to Ahmedabad make it a point to visit the Akshardham Temple situated nearby. The temple is a carved stone edifice, which stands surrounded by expansive gardens. Akshardham Temple enshrines a seven-foot high, gold-leafed, idol of Lord Swaminarayan.

Six thousand tonnes of pink sandstone were used in the construction of the monument. Akshardham Temple of Gujarat stands tall at a height of 108 feet and is 240 feet in length and 131 feet in width. The colonnade around the monument measures 1,751 feet (534 meters) in length. The garden surrounding the sanctum sanctorum is known as Sahajanand Van and represents a unique blend of contemplative garden and children's park. There is a marble sculpture of Lord Swaminarayan inside the garden also.

Sahajanand Van also comprises of a number of cultural spots, rides and games for children, an herbal garden, a lake and a waterfall. Akshardham temple complex also has a research center, known as the Akshardham Center for Applied Research in Social Harmony (AARSH). The research center has facilities like an extensive library, study stations and archives, but only enlisted scholars can enter the library and make use of its facilities. The first floor of the temple has a museum, which has a gallery with a collection of over 500 'parahansas'.

Other items displayed inside the temple complex include the letter to Swaminarayan's guru, Ramanand; an art object from an old tree from Chapaya; Swaminarayan's shawl and an image of the Lord on a horse. The exterior galleries serve as the venue for artistic exhibition and offer Chez Integrovision shows, audio-visuals, multi-media and the works of Lord Swaminarayan from the Hindu epics. There are three permanent exhibition halls inside the complex, set up with the aim of educating people on spiritual matters and BAPS movement.

Hall 1 (Sahajanand)
The Sahajanand exhibition is organized in Hall number one and uses imaginative settings and shows to illustrate the life of Lord Swaminarayan. The exhibition showcases 'travel in time' through a video show, a fiber-optics cosmos, miniature recreation of Chhapiya village, three 'sound-n-light' shows, etc.

Hall 2 (Sat-Chit-Anand)
The Sat-Chit-Anand exhibition has a 14-screen multimedia presentation on display. Apart from that, there is "Integrovision", an exposition of Vedic philosophy and of man's search for the eternal truth, "Tunnel of Mirrors", a glass mosaic, and dancing musical fountains.

Hall 3 (Nityanand)
The Nityanand exhibition has walk-through dioramas and fiberglass figures displaying the message of the Upanishads, Ramayana and Mahabharata. Audio-animatronics show; a recreation of the Hastinapur palace (Mahabharata); a recreation of a peaceful Gurukula; compositions of saint-poets and an exposition on 'Harmony of world religions' are the other attractions of the exhibition.