Indian Weddings Home Remedies Ayurveda Vastu Yoga Literature
Moti Masjid is one of the most magnificent structures situated inside the Read Fort of Agra.
Home : Monuments of India : Moti Masjid 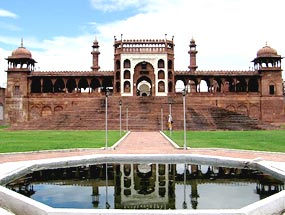 Moti Masjid of Agra is situated inside the premises of the famous Red Fort of the city. Mughal Emperor Shah Jahan got this magnificent monument built inside his fort. The construction work on the mosque was started in the year 1648 and was completed in 1654. Moti Masjid is built out of pure white marble, which gives the look of pearl color. Infact, it is this pearl color of the mosque that led to its naming as the Moti Masjid, with the term 'Moti' meaning 'Pearl' and 'Masjid' meaning 'Mosque'.

The architectural beauty of the Moti Masjid serves as the perfect example of the exquisite craftsmanship of the artisans of India. The mosque was intended to serve as the private worship place of the royal members of the court. It is situated near the 'Diwan-E-Aam', the hall where the emperor used to hold public audiences. The prayer hall of the mosque lies on its western side. Moti Masjid of India is flanked, on the northern, the southern as well as the eastern side, by a porch, which is adorned with twelve pillars and an arch.

Beyond these cloisters lies the main sanctuary. Crowning the mosque are three huge and magnificent domes. Its parapets are lined with a series of domed kiosks, which have been designed as per the Hindu architectural style. There are seven bays inside the mosque that divide it into several aisles. Piers and overhead arches hold all these aisles together. The main entrance to the Moti Masjid is situated on its eastern side. Situated on the banks of river Yamuna, the mosque comes across as the perfect example of Shah Jahan's architecture.

The main pulpit of the mosque is reached after climbing four steps, quite unlike the usual mosques with a three-steps pulpit. On either side of the main prayer hall is another prayer hall, meant to be used by the women. These separate prayer halls stand adorned with marbled lattice worked screens. The western wall of Moti Masjid stand marvelously ornamented with carved and inlaid mihrabs. Anyone visiting the Taj Mahal must make sure to visit the Red Fort and in it, the magnificent Moti Masjid.