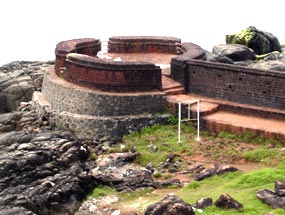 Bekal Fort is situated at a distance of approximately 16 km to the south of the Kasargod district of Kerala. Lying at the northern tip of the state, the fort dates back to the decade of the 1960s. It is believed to have been constructed under the aegis of Sivappa Naik of the Ikkeri dynasty. Another belief is that the Bekal Fort of Kerala was originally constructed by the Kolathiri Rajas and later annexed by Sivappa Naik. The fort was first conquered by Hyder Ali of Mysore in 1763 and then the Huzur of Canara took over it, during Tipu Sultan's reign.

Bekal Fort also came under the occupation of British, during their rule over India. During that time, the erstwhile Bekal taluk was a part of the South Canara district and comprised of the present-day Kasaragod and Hosdurg taluks. Bekal Fort holds the distinction of being the largest as well as the best-preserved fort in the state of Kerala. The fort is a huge circular edifice, which rises to a height of around 130 ft above the sea level. It is spread over a 35 acres promontory, which runs into the Arabian Sea.

Bekal fort is reached through a zigzag entrance, which was deliberately designed to serve as a protection against the enemies. The fort also has a sea bastion, a number of underground tunnels and an observation tower, which give it a magnificent look. Tippu Sultan, the ruler of Mysore, extended the fort by building a mosque just outside its premises. Situated at the entrance of the fort is a temple, known as Anjaneya temple, which is dedicated to Lord Hanuman. It is said that the temple is as old as the fort itself.

The heart of the Bekal fort houses the observation tower, which is reached through a broad and wide flight of stairs. The tower has a circumference of approximately 80 feet at the base. It rises to a height of 30 feet and provides a magnificent view of the sea on three sides, along with the green landscape situated to the east of the fort. There are a number of underground passages inside the Bekal fort that lead to the outside area.

Two of the underground tunnels are still present and can be seen easily. One of them leads to the south of the fort, while the other takes you to the moat on the east. The storeroom inside the Bekal Fort is used to store weapons and ammunition. It is under the management of the Archaeological Survey of India (ASI) and is closed to the general public. To the west of the fort is a sea bastion, located on the rocky projection, offering a magnificent view of the sea as well as the beach.

There is also a seaside pathway, from which one can have a breathtaking view of the fort to the east. To the west, we can see the sea linking the beaches north and south of the battlement. Bekal fort is managed as well as controlled by the Archaeological Survey of India (ASI). Many excavations were carried out here, which lead to the discovery of numerous old coins and other historical artifacts. Bekal is also one among the five centers that have been selected by the Government of India to be developed into a 'Special Tourism Area'.