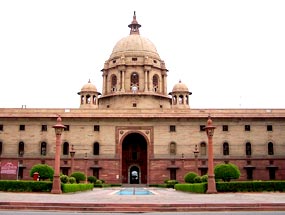 Rashtrapati Bhavan is the name given to the official residence of the President of India. It is situated in New Delhi, near the magnificent India Gate. Before India's independence, the Bhavan used to serve as the residence of the Governor-General of India and was known as the 'Viceroy's House'. This name continued to be used even after independence and it was only in the year 1950 that it was changed to 'Rashtrapati Bhawan'. The area in which this monument is situated is known as Lutyens' Delhi.

It was in the Delhi Durbar year of 1911 that the decision to shift the capital of India to Delhi was taken. British architect Edwin Landseer Lutyens was hired to design and build the entire area of New Delhi and within it, the Governor-General's residence that later came to known the 'Viceroy's House'. Along with Edwin, Herbert Baker was appointed to work as the architect of the Rashtrapati Bhawan. It was also decided that the architecture of the President's House would be basically classical, but with an Indian motif.

The monument is entered through Gate 35, which is located on Prakash Vir Shastri Avenue. The top of the monument seems to be crowned with an ancillary dome-like structure, known as 'Chattri'. The eastern facade of the monument has twelve unevenly spaced columns, with the Delhi order capitals. A blend of acanthus leaves and four pendant Indian bells, one on each corner, adorn these capitals. The front portion of the Rashtrapati Bhavan is devoid of windows, except for the wings at the sides.

The monument, then 'Viceroy's House', was completed in the year 1929 and its official inauguration ceremony took place in 1931. It took approximately seventeen years to complete the magnificent building and on the eighteenth year after its completion, India attained independence. After independence, the ceremonial Governor-General continued to occupy the building. It was in 1950 that India became a republic and nominated the first president, who took over the 'Viceroy's House' and renamed it as the 'Rashtrapati Bhavan'.

Apart from the Indian style, one can also see Mughal and European colonial architectural elements in the construction of the building. There are 340 rooms in the Rashtrapati Bhawan, which cover a floor area of 200,000 square feet. 700 million bricks and 3 million cubic feet of stone were used for constructing the edifice, which has only minimal usage of steel. The entire building has been built around huge courtyards, with a number of squares and open inner areas within. The president stays in a separate wing, while the guests stay in another wing.

There is a Viceroy's wing, meant to be used by the president. However, it is so flamboyant that the first president of India decided not to stay there. He stayed in the guest wing and so have all his successors till date. The wing is a separate four-floor apartment, having its own courtyards. The heart of the President's House comprises of the Durbar's Hall, which was initially the 'Throne Room' housing the thrones for the Viceroy and his wife. The hall has columns made by combining vertical lines with the motif of a bell.

There is a 2-ton chandelier in the hall, which brightens up its otherwise simple interiors. There is one room in each corner of the hall, comprising of the two state drawing rooms, a state supper room and the state library. The hall serves as the venue of all the official ceremonies, such as the swearing in of the Prime Minister, the Cabinet and the Members of Parliament. The President of India also gives away the Arjuna Awards for Excellence from the confines of the Durbar's Hall only.

The interiors of the Durbar's Hall as well as most of the other rooms of the Bhawan are quite simple. Heavy stonework and shapes have been used to present an image of simplicity rather than elaborate ornamentation. Other rooms inside the Rashtrapati Bhavan include State Dining Hall, Sitting Rooms, Billiards Rooms, State Ballroom, State Drawing Room, etc. Near the Viceroy's stairs, we see eight marble lions spilling water into six basins.

Rashtrapati Bhavan is the biggest President's residence in the whole world.

The Rose Garden of Rashtrapati Bhavan is open to public every year, in the month of February.

Steel was not used in the construction of the Rashtrapati Bhavan.