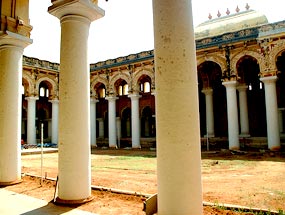 Thirumalai Nayak Palace is situated in the Madurai city, at a distance of approximately 2 km to the southeast of the Meenakshi Temple. The palace was constructed by King Thirumalai Nayak of Tamil Nadu, in the year 1636, and used to serve as his official residence. An Italian architect designed the edifice as per the Indo-Saracenic style of architecture. Thirumalai Nayak Palace of India, as we see today, is nothing in comparison to its original structure, which was at least four times bigger in size.

The palace was basically divided into two parts, one of them is known as the Swargavilasa (Celestial Pavilion), while the other is Rangavilasa (Pleasure Pavilion). These two complexes jointly housed the royal residence, theatre, shrine, apartments, armory, palanquin place, royal bandstand, quarters, pond and even a garden. The main attraction of the Thirumalai Nayak Palace comprises of its courtyard and the dancing hall. A massive wall, with a height of almost 12 meters, used to run around the complex and was present till a century ago.

The main palace inside the complex was flanked by a rectangle-shaped courtyard. The courtyard stands adorned by soaring arcades, which have exquisite carvings festooning the surface. In the initial days, the main entrance to the Thirumalai Nayak Palace was situated to its north. However, in the last century, a different entrance was renovated and the palace is now entered from there only. The arches of the palace have been supported by giant pillars, which soar to a height of around 12 meters.

Joining these pillars is foliated brickwork and an entablature, which is upto 20 m high. The ornamentation done in the palace has made use of exquisite stucco, known as chunnam (shell lime). The pavilions on either side of the courtyard of Thirumalai Nayak Palace have been adorned with finials that seem to be covered with gold. To the west of the courtyard lies the Swargavilasa, which is spread over an area of approximately 75 m, from the north to the south, and 52 m across.

A flight of steps, which are guarded by stone horse riders, takes the visitors to the pavilion. The central dome of the pavilion stands supported by 12 columns, which are joined together with the help of colossal Saracenic arches. The dome is situated at a height of 25 m from the floor of the building. An octagonal drum rises from the four corner arches that have been perforated by a clerestory. The octagonal shape gives rise to a circle after a height of 15 m. The dome, as well as the arches, of the Swargavilasa has beautiful stuccowork.

There are approximately 248 pillars inside the Thirumalai Nayak Palace, each of them being 58 feet in height and 5 feet in diameter. There is also a square building of black stone, situated inside a dome-shaped hall. The building consists of a chamber, which has been constructed out of ivory. Inside this chamber is a bejeweled throne, used by the King during the Navratri celebrations. In the western side of the Swargavilasa, the harem was situated, along with the queen's apartments. However, they are not in existence today.

The southwest portion of the complex houses a room, ornamented with black polished columns. The room was used by the queen of the Thirumalai Nayak Palace while listening to music and literary discourses. Natakshala, the drama hall, was situated in the northwest corner of the building. The roof of the hall comprised of a pointed arch of brickwork, which was made strong with the help of granite ribs that sprang from a double line of arches supported by columns. The palace also comprises of a shrine, situated in the northeast square.

This shrine was used by Thirumalai Nayak to offer prayers to goddess Rajrajeswari every morning. Then, we have the magnificent Throne Chamber. It is a massive room adorned with a raised, octagonal dome. After passing the Throne Chamber, one reaches the Dance Hall. Chokkanatha Nayak, the grandson of the King Thirumalai Nayak, was the person responsible for the destruction of Thirumalai Nayak palace. After ruining it, he took out the precious jewels and woodcarvings to use them in the construction of his own palace at Tiruchirapalli.

Restoration work was carried out at the Thirumalai Nayak Palace in the 19th century by Lord Napier, the Governor of Madras. The restoration work was done in order to make the palace ready for housing some officials of the judiciary and district administration. Presently, only the Swargavilasa and a few adjacent edifices of the Thirumalai Nayak Palace have survived. After independence, the palace was declared as a national monument and now, it is under the management and control of the Tamil Nadu Archaeological Department.

Light and Sound Shows
Light and Sound shows are organized at the Thirumalai Nayak Palace for the general public. These shows illustrate the story of Silappathikaram in both Tamil as well as English language. Each show goes on for half an hour and eulogizes the virtues of the King Thirumalai.