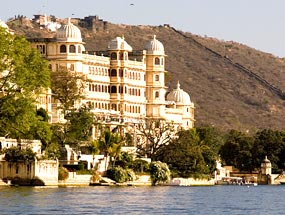 Fateh Prakash Palace counts amongst the popular tourist attractions of the Udaipur city of Rajasthan. This palace is a part of the City Palace complex, which dates back to the early 20th century, the time when Maharana Fateh Singhji used to rule over Udaipur. The most famous attractions of the Fatehprakash Palace of India are the exquisite Mewar School paintings that adorn its corridors. This school flourished in Rajasthan during 17th to 19th century. Maharana Fateh Singh used this palace for residential purposes.

The palace has now been converted into a hotel. A visit to the Fateh Prakash Palace is incomplete without a visit to its excellent Crystal Gallery. The gallery houses an amazing assortment of Osler's Crystals, which were mainly collected by Maharana Sajjan Singh. Infact, he was the one who placed an order with F & C Osler of England, for purchasing the crystals. However, it was quite unfortunate that the Maharana could not live to see the crystals being delivered at the palace.

The most famous item of the Crystal Gallery is a carpet, which has been studded with sparkling jewels. The other crystal items displayed in the gallery include tables, sofa sets, dinning table, dressers, fountains, beds, washing bowls, decanters, perfume bottles and so on. Apart from the Crystal Gallery, another hall worth visiting in the palace is the Durbar Hall. The hall served as the perfect venue for holding state banquets as well as formal and informal meetings.

The best as well as the most magnificent Durbar Hall in country, the Durbar Hall of Fateh Prakash Palace is enormous in size. One can only be mesmerized by the exquisite chandelier, which hangs in the middle of the Durbar Hall. Other attractions of the hall include the paintings of Maharanas and a rich collection of arms and weapons on its walls. The numerous viewing galleries surrounding the hall were meant to ensure that the ladies of the palace have an outside view from the privacy of their veils.