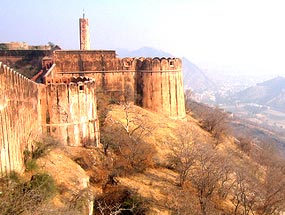 Location: Jaipur, Rajasthan
Founded In: Between 15th and 18th Century

Jaigarh Fort, one of the most magnificent forts of India, is situated in Jaipur, the 'Pink City' of Rajasthan. It is perched on top of a hill and is situated in the outskirts of the city, at a distance of approximately 15 km. Jaigarh fort is also known as the 'Fort of Victory' and was constructed somewhere between 15th and 18th Century. It is still in its original shape since not even once during its lifetime has it fallen to enemy forces. One has to climb a steep road in order to reach the main gate of the fort, known as Dungar Darwaza.

The road leading upto the fort provides a panoramic view of the surroundings. The walls of Jaigarh fort are spread over three kilometers. The fort used to serve as the center of artillery production for the Rajputs. It is also home to the Jaivan Cannon, world's largest canon on wheels. There is a 5 km long canal that used to bring in water from the high hills, which was stored in the fort for the army men. Jaigarh fort also served as the royal treasury of the Maharajas of Jaipur for a number of years.

The legend has it that the Kings of Amber/Jaipur used the compartments below the water tank to store the gold and jewelry. The various structures inside the fort have been connected through numerous passageways. Surrounding the Jaigarh Fort is a moat, which served as a protection against enemy assaults. In the past, the fort was kept sealed by the government for a period of seven years. This was done in the view of the rumor that there is a huge treasure of gold buried in it. Many searches and excavations were carried out, but they led to nothing.

Jaivan Cannon
The huge Jaivan cannon has been placed on the top of a tower inside the Jaigarh fort. It has an 8 m barrel, with a trajectory of about 20 km, and weighs approximately 50 tons. It is said that the cannon is so massive that it took four elephants to swivel it around on its axis. However, what is more surprising is the fact that the cannon has not been used till date. It was only test fired once by Jai Singh in 1720 and the cannon ball fell about 38km away. The impact of the test was the formation of a lake on the spot and collapse of many houses in Jaipur.

Vijay Garh
Vijay Garh is the name given to the part of the fort that used to serve as its armory. It boasts of a large compilation of swords and small arms, including time bombs. Then, there is an interesting treasury lock with five keys, big wine and oil jars and even a 1681 map of Amber. You can also try your hands at the mini cannon kept here.

Jaigarh Cannon Foundry
The cannon foundry of Jaigarh dates back to the 16th century. One of the few surviving medieval foundries in the world, Jaigarh cannon foundry was built under Bhagwan Das. The collection of the foundry includes a furnace, a lathe, tools and a number of cannons. After Bhagwan's adopted son, Man Singh I, brought all information related to gunpowder from Kabul, cannons began to be made in Jaigarh. There is a point inside the foundry, known as Damdama, where ten cannons were kept in a row, facing the Delhi Road.

Diya Burj
Diya Burj (the turret of lamps) is a seven-storied structure that represents the highest point in the Jaigarh fort. The edifice offers an amazing view of the Jaipur city. The water supply and storage system of the fort is an amazing feat in itself. Sagar Talav, with octagonal bastions and huge dams, is one of the biggest reservoirs of the fort. Apart from that, there are a number of baolis (step wells) and temples inside the complex. The most prominent temples are Shri Ram Hari Har Temple and Kal Bhairava Temple.

Museums
The museums situated inside the Jaigarh Fort house an amazing collection of paintings, photographs, puppets and ancient coins. Other items displayed inside the museum include a balance for measuring explosives, a 16th century coin container, etc.

Palace Complex
The entire palace complex of the Jaigarh Fort was built by various kings, over a period of two centuries. The palace begins with the Diwan-i-Aam (Hall of Public Audience). Then, we come across the Khilbat Niwas (Commanders' Meeting Hall) and an open pillared hall, Subhat Niwas. The luxury suites, namely Aram Mandir (Rest House) and Vilas Mandir (Pleasure House), are definitely worth visiting. The pavilions surrounding the courtyard have a labyrinth of passages and offer excellent views of Amber Fort.

Lakshmi Vilas Palace
Lakshmi Vilas Palace is one of the most beautiful palaces inside the Jaigarh Fort. The palace stands adorned with exquisite blue frescoes. One can also see the remnants of an old Mughal garden. There is also a little 'theater' hall, where dance, music recitals and puppet shows used to be held for the entertainment of the royals.