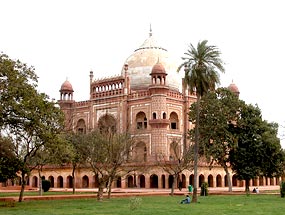 Safdarjung Tomb is one of the most magnificent tombs of India, situated in the capital city of Delhi. The mausoleum serves as the last resting place of Safdarjung, the governor of Awadh and later the Prime Minister of Mughal Emperor Muhammad Shah. It was built under the aegis of Nawab Shuja-ud-Daulah, Safdarjung's son. Safdarjang Tomb dates back to the year 1753 and lies at the Lodi Road of New Delhi, near the Safdarjung Airport.

Surrounded by blooming gardens, the entire complex of Safdarjung tomb covers an area of approximately 300 sq km. The garden of the tomb has been designed as per the Charbagh style of the Mughal gardens. It is also said that tomb of Safdar Jung is built almost on the same pattern as the Humayun's tomb. The mausoleum represents that time when the Mughal style of architecture was almost on the road to its downfall.

Safdarjung tomb has been constructed out of red sandstone and buff stone. Along with Safdarjung, the tomb also houses the remains of his wife. There are eight rooms surrounding the central chamber of the mausoleum, which is square in its shape. All the apartments in the Safdarjang Tomb, with the exception of the corner ones, are rectangular in shape. The corner ones have been built in the shape of an octagon.

Supporting the dome of the mausoleum is a sixteen-sided base. Exceptionally splendid pavilions are situated on the either side of the Safdarjung tomb. They are known as 'Moti Mahal' (Pearl Palace), 'Jangli Mahal' (Sylvan Palace) and 'Badshah Pasand' (Emperor's Favorite). The tomb of Safdar Jung has been criticized numerous times for its weakness in proportions, which has led to a lack of balance in its make-up.