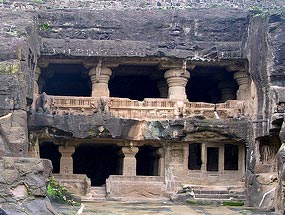 Ellora Caves, one of the popular tourist attractions of India, are situated at a distance of approximately 25-30 km from the Aurangabad city of Maharashtra. The caves hold the distinction of being a UNESCO World Heritage Site. Ellora caves symbolize the pinnacle of the rock cut architecture in the Indian subcontinent. There are thirty-four Ellora caves in toto and all of them are basically structures that have been excavated out of the vertical face of the Charanandri hills.

Ellora Caves of India comprise of Hindu and Jain cave temples, along with Buddhist chaityas (halls of worship) and viharas (monasteries). All these caves have been found to date back to somewhere between 5th century and 10th century. The first twelve caves, numbered one to twelve, belong to the Buddhist religion and were built between 550 and 750 AD. The next seventeen caves, numbered thirteen to twenty-nine, are Hindu temples that were constructed around 600 to 875 AD.

The last set of caves, numbered thirty to thirty-four, represent the Jain religion. The Jain caves date back to the time period between 800 AD and 1000 AD. All these caves have been built in proximity to one another and symbolize the religious tolerance prevalent during that period. Almost all of the Ellora Caves have been adorned with outstanding paintings and sculptures. Not much time back, archaeologists unearthed twenty more caves at Ellora, which were devoted to Lord Shiva.

Buddhist Caves
The Buddhist caves of Ellora mainly comprise of viharas (monasteries). These monasteries are basically huge, multi-storied buildings that have been carved into the mountain face. Each monastery comprises of living quarters, sleeping quarters, kitchen and other rooms. Some monasteries even have shrines, which are adorned with carvings of Lord Buddha, bodhisattvas and saints. Many of the sculptures adorning the caves look like wood, even though they have been carved out of stone.

The most popular Buddhist cave is cave number ten, which is basically a chaitya hall (chandrashala). Known as 'Vishwakarma cave' or 'Carpenter's Cave', it has a shape and design much similar to that of a cathedral. The multi-storied entry of the cave leads to the chaitya, which has ceilings that gives the appearance of wooden beams. Placed in the middle of the cave is a 15-foot Buddha statue, where He is shown seated in a preaching pose. Cave number one to nine are monasteries, while the last two are called Do Tal (cave 11) & Tin Tal (cave 12).

Hindu Caves
All the Hindu caves have elaborate carvings done on them, right from top to bottom. Cave number sixteen is known as the Kailasa or Kailasanatha Temple and is probably the most popular as well as more exquisite of all the Hindu caves at Ellora. The cave has been designed in such a way so as to illustrate Mount Kailash, the abode of Lord Shiva. Carved out of a single piece of rock, it is a multi-storied temple complex that spreads over an area double the size of the Parthenon in Athens.

As one crosses the two-storied gateway of the caves, a U-shaped courtyard comes into sight. Three-stories high columned galleries edge the courtyard and stand scattered with huge sculpted panels and alcoves with sculptures of deities. The central temple has been built as per South Indian architectural style and houses the Shiva Lingam, along with an image of the Nandi bull. Illustrative carvings adorn the lower stories of the two-storied Nandi Mandap, which is connected with the porch by a living rock bridge.

Most of the deities at the left of the entrance are Shaivaite (followers of Lord Shiva) while the right hand side houses Vaishnavaites deities (followers of Lord Vishnu). The courtyard has two pillars, with the flagstaff, known as Dhvajastambhas and houses a huge sculpture of Ravana, who is shown attempting to lift Mount Kailasa. It took 200 years and 200,000 tonnes of rock to complete this temple. Other prominent Hindu caves are Dasha Avatara cave (cave 15), Ramesvara cave (cave 21) and Dhumar Lena cave (cave 29)

Jain Caves
Jain caves symbolize certain special aspects of the Jain religion, especially the strict sense of asceticism. Though the Jain caves are not as much in size as the other caves, they do exhibit remarkably detailed art works. The thirty-second cave is known as Indra Sabha. It is basically a shrine, which has a ceiling that is adorned with a very delicate carving of the lotus flower.

There is another cave, where one can see an impressive yakshi seated on her lion under a mango tree, which is laden with fruits. Almost all the caves belonging to the Jain religion have intricate detailing that ornaments their interiors. Many of the caves also have fragments of paintings in the ceilings, which stand testimony to the fact that once they were decorated with rich images.