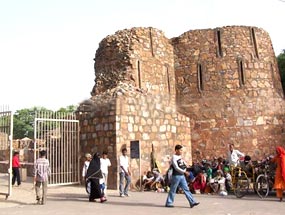 Feroz Shah Kotla was the erstwhile citadel of Ferozabad, the Fifth city of Delhi. It is situated off the Bahadur Shah Zafar Marg of Delhi, near the Feroz Shah Kotla Cricket Stadium. Emperor Firoz Shah Tughlaq, the nephew of Ghiyasuddin Tughlaq and successor of Muhammad Tughlaq, got the citadel of Ferozshah Kotla built in the year 1354. Along with the citadel, he also laid the foundation of the city of Ferozabad. The city and its citadel were designed by the famous architects, Malik Ghazi and Abdul Hakk.

During that time, Feroz Shah Kotla was popularly known as Kushk-I-Feroz, meaning Feroz's palace. The city of Ferozabad extended from Hauz-Khas in the southwest to Pir Ghaib in the north. The Firoz Shah Kotla citadel of India comprises of three rubble-built walled rectangular enclosures. The design of the citadel looks like an irregular polygon, which has the eastern wall in one alignment. The eastern wall of Feroz Shah Kotla was constructed on the embankment of River Yamuna.

It is believed that Emperor Firoz Shah Tughlaq had three other palaces in Delhi, when he began the construction of this citadel. The reason for its construction was that the all the other palaces were facing a shortage of water. Of the three enclosures of Feroz Shah Kotla, the largest enclosure is the central one. It is presently known as 'Kotla Feroz Shah' and has an impressive main gateway in the western direction. On either side of the gateway are fortresses, which lie mainly in ruins today.

Ferozshah Kotla is at times compared with the 'Windsor Palace of London'. In its glorious days, the citadel was the perfect example of architectural beauty. However, it was abandoned in the year 1490 and since then, it has been lying mostly in ruins. The successive rules of Delhi used most of its ruins for the construction of other cities. However, even after being in neglect for many years, Firoz Shah Kotla still has many interesting structures within its premises and is visited by tourists in large numbers.

Ashokan Pillar
There is an Ashokan Pillar situated inside the premises of the citadel, which lies to the north of Jami Masjid. The pillar dates back to the 3rd century BC and rises to a height of 13 m. It is a sandstone structure and stands on a rubble-built three-tired pyramidal structure. Emperor Feroz Shah Tughlaq got the pillar, which weighs 27 tonnes, transferred from Topar (Ambala) to Delhi. Another pillar, quite similar to the Ashokan Pillar, was also brought by Feroz Shah Kotla and it was fixed on the ridge.

Ashokan Pillar has been carved with seven main inscriptions or edicts of Emperor Ashoka. Apart from that, there are numerous figures and minor inscriptions engraved on the pillar. The edicts were written in the Brahmi script of Pali language and were first deciphered by James Prinsep in 1837. The pillar is made of sandstone. However, it was polished in such manner that even today it looks as if it has been made up of some metal. Since Feroz Shah adorned the pillar during his rule, it came to be known as 'Minar-i-Zarin'.

Jami Masjid
Jami Masjid is situated next to the Ashokan Pillar in the citadel of Feroz Shah Kotla. The structure that once made up the mosque has today been reduced to the southern and western walls with the gateway. Jami Masjid was one of the largest mosques of the Tughlaq period and rests on a series of cells on the ground. It is still in use today. However, most of the structures of the mosque, including the prayer hall as well as the walkways, situated on the sides of the courtyard that was used by the royal ladies, have vanished.

The mosque is made of local quartzite stone and is entered from the northern side. At one point of time, Jami Masjid was connected to the citadel by a bridge. It is said that, in the past, there was an entrance to the mosque from the underground cells also. So great was the beauty of the mosque that Timur constructed a similar mosque at Samarkand in Iran. In the year 1759, the mosque became the site of the murder of Emadul Mulk, the prime minister of the Mughal Emperor Alamgir Sani, by his own emperor.

Baoli
As you move towards the northwest of the Ashokan pillar, you will come across a garden. In the center of the garden is situated a large circular baoli or step well. Apart from subterranean apartments, the baoli also has a large underground drain for the water towards its eastern side. The baoli was only used by persons of royal lineage and used to serve as a cool haven during summers.

Other Structures
The other structures inside the Feroz Shah Kotla include the foundation structure of a square hall. It is situated behind Ashokan Pillar, to the north of Jami Mosque. Then, there are ruins of many other structures, which have not been identified as yet, since they are in a very decrepit shape.