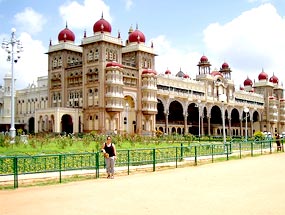 Mysore Palace is one of the most prized possessions of the Mysore city of Karnataka. The foundation of this magnificent palace was laid down in the year 1897 and it took approximately five years for the monument to be completely ready. The palace used to serve as the official residence of the former royal family of Mysore and also housed the royal durbar (offices). Mysore Palace of Karnataka is officially known as the 'Amba Vilas' and counts amongst the numerous historic palaces of the city.

Wodeyar kings, who used to rule over the Kingdom of Mysore till India attained independence, built a palace in the city in the 14th century. However, the palace was partially damaged in 1638, after being hit by lightning. Thereafter, it was renovated as well as extended. However, by the late 18th century, it again fell into neglect. The palace was demolished in 1793 and another palace was built in its place. In 1897, a fire occurred in the palace during the wedding of Princess Jayalakshmanni and it came down to ruins.

Finally, in the year 1897, Kempananjammanni Vanivilasa Sanndihana, the Queen-Regent of Mysore ordered the construction of another palace at the same site. She commissioned British architect, Henry Irwin, to build the palace using different styles of architecture. The construction was completed in 1912, at a cost of approximately Rs. 42,00,000. There is dominance of Indo-Saracenic style in the architecture of the Mysore Palace, which has been beautifully blended with Hindu, Muslim, Rajput, and Gothic styles.

The palace is a three-storied stone structure and stands adorned with pink marble domes and a 145 ft high, five-storied, tower. It has been constructed out of gray granite and is encircled by a large blooming garden. The facade of Mysore Palace is flanked by seven expansive arches, out of which the central one is supported by soaring pillars. The central arch is also adorned with a remarkable sculpture of Gajalakshmi, the goddess of wealth, who is always shown being flanked by elephants on both sides.

Mysore Dasara Festival
Every year, Mysore Palace serves as the venue of the Mysore Dasara Festival, held in the autumn season. During the festival, the entire palace is lit up with thousands of bulbs. A stage is put in the palace grounds, where artistes from different parts of the country come and perform. On the tenth day of the festival, known as the Vijaya Dashami, a parade originates from the palace grounds, with ornamented elephants and other floats.

Diwan-e-Khas
Diwan-e-Khas is the hall used by the king for holding private rendezvous. It is an impressive room, which is entered through an exquisitely carved rosewood doorway, inlaid with ivory. The central knave of the hall, stands ornamented with elaborately gilded columns, stained glass ceilings, decorative steel grills, chandeliers with fine floral motifs and mosaic floor inlaid with semi-precious stones.

Gombe Thotti
Gombe Thotti, also known as the Doll's Pavilion, is a gallery that has a rich collection of traditional dolls, dating back to the nineteenth and early twentieth centuries. Apart from that, the gallery also houses an amazing assortment of Indian and European sculptures and ceremonial objects, like a wooden elephant howdah bedecked with 84 kg gold.

Kalyana Mandapa
Kalyana Mandapa served as the marriage hall of the royalty. It is basically a huge pavilion, in the shape of an octagon. The pavilion has a multihued stained glass ceiling, adorned with peacock motifs arranged in geometrical patterns. It is said that the entire structure was fashioned in Glasgow city of Scotland. Even the floor of the Mantapa is ornamented with the peacock theme and has a peacock mosaic. On the walls of the palace are exceptional oil paintings, illustrating the royal procession and Dasara celebrations of that time.

Public Durbar
Public Durbar, or the Diwan-e-Aam, is the hall where the king used to hear the petitions of the general public.

Armory
Mysore Palace also houses an armory, with a rich collection of different types of arms that were once used by the members of the royal family. These include weapons that were used in the 14th century (like lances, cutlasses, etc), as well as early 20th century (like pistols).