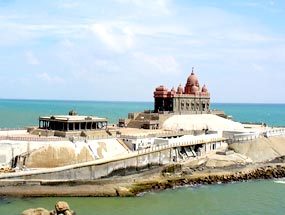 Vivekananda Memorial is situated near the city of Kanyakumari, which lies at the southernmost tip of the Indian Peninsula. The meeting point of Arabian Sea, the Indian Ocean and the Bay of Bengal, the city is known for its breathtaking sunrises and sunsets. It is in the sea that we see a rocky islet, at a distance of approximately 400 m from the shore. On this islet stands a magnificent monument called the Vivekananda Rock Memorial, dedicated to Swami Vivekananda, a leader, a philosopher a social reformer.

The memorial was built under the aegis of the Vivekananda Memorial Committee. It dates back to the year 1970 and was built in the commemoration of the visit of the great leader to the islet. Swami Vivekananda visited the city of Kanyakumari in 1892. One day, he swam in the sea and reached the islet. He stayed there for an entire night and kept on meditating. It is believed that it was here that he received enlightenment. The Vivekanand Rock Memorial was later erected in honor of his visit.

Sthapati Sri S.K. Achari was the architect of the memorial, which was later consecrated by Srimad Swami Vireshwarananda, the President of Ramakrishna Mission. The official inauguration ceremony of the monument was held in September 1970 and it was conducted by Sri. V.V. Giri, the then President of India. There are two main structures that make up the entire complex of the Vivekananda Rock Memorial, namely Vivekananda Mandapam and Shripada Mandapam.

Shripada Mandapam
Each of the madapams is situated on a rock, which lie at a distance of about 70 meters. The smaller one is known as 'Sripada Parai' and is believed to be the place where Goddess Kanya Kumari meditated. Standing as a testimony to this incident are imprints of feet, believed to be those of the Goddess. The footprints have now been enclosed in a shrine, which has been given the name of Sripada Mandapam. The shrine comprises of the sanctum sanctorum, an inner parikrama (passageway), an outer parikrama (passageway) and an outer platform all around it.

Inside the hall is the statue of Swami Vivekananda in a standing posture, in which he is looking towards the 'Sripadam'. The main entrance of the Vivekananda Mandapam has the symbol 'om' written on the top, in Tamil language. The architecture of the mandapam represents an amalgamation of styles of temple architecture from different parts of India. The main entrance to the Vivekananda Mandapam is provided by a flight of steps.