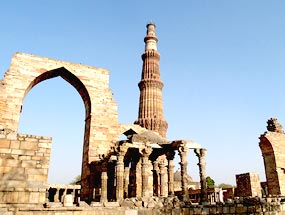 The minar narrows down from the bottom to the top. It has a diameter of 14.3 meters at the bottom, while at the top it comes down to only 2.7 meters. The entire edifice has been constructed with the help of red and buff sandstone and serves as the perfect example of Indo-Islamic architecture. Only the ground floor and the first floor of Qutub Minar were constructed by Sultan Qutub-ud-Din Aibak. Later, Iltutmish added three more floors to it. Projecting balconies, supported by stone brackets, encircle all the floors of the monument.

These brackets have been adorned with honeycomb design, which is more visible in those of the first floor. The first floor of the minar as well as its balcony has a curved and fluted design. By the time we reach the second floor, only the curved design remains, while the third floor boasts of only the fluted design. Floral motifs and arabesques adorn the monument, which was repaired by Firoz Shah Tughlaq and Sikandar Lodi. The inscriptions on the surface of the floor tell us that Firoz Shah renovated the top floor and added marble to the building.

All the artisans employed for the construction of Qutub Minar were Hindus and even the raw material for the monument was obtained from existing Hindu and Jain temples. Since human and animal figures are not allowed in Islam, the motifs illustrating them were later disfigured. There are a number of structures inside the complex of Qutab Minar, all of which have been declared as World Heritage Sites by UNESCO.

Quwwat-ul-Islam Mosque
Quwwat-ul-Islam Mosque, constructed by Qutub-ud-Din Aibak, dates back to the year 1198. The oldest mosque in the capital city built by the Delhi Sultans, it stands on the site where once 27 Hindu and Jain temples stood. These temples were razed to construct the mosque and one can still see their carved columns and architectural appendages supporting the cloisters of the mosque's courtyard. Later, Iltutmish and Ala-ud-Din Khalji erected an arched screen and enlarged the mosque.

Tomb of IItutmish
Iitutmish Tomb is a simple square chamber, which has been constructed of red sandstone. Built in the year 1235, this monument stands carved with inscription and geometrical and arabesque patterns in Saracenic tradition, on its entrances as well as the whole interiors. It is said that in the past, the tomb had a dome also. However, it fell down because the walls could not stand its heavy weight.

Alai Darwaza
Alai Darwaza is the name given to the southern gateway of the Quwwat-ul-Islam mosque. Ala-ud-Din Khalji got the gateway constructed in the year 1311. It boasts of being the first gateway with a horseshoe arch and true dome. Along with that, it was also the first structure, which employed Islamic principles of construction and decoration.

Madrassa
A madrassa was also constructed by Ala-ud-Din Khalji, towards the southwest of Qutub Minar. It was intended to provide religious education to the children.

Alai Minar
Another one of Ala-ud-Din Khalji's constructions, Alai Minar was intended to be double in size to the Qutub Minar. However, the monument could not be fully completed. Only the first story, with a height of 25 m, was fully built. Alai Minar is situated to the north of the Qutub Minar.