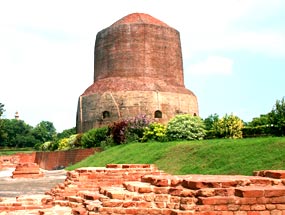 Location: Sarnath, Uttar Pradesh
Best Time to Visit: Throughout the year
Timings: From Sunrise to Sunset

Dhamekh Stupa is situated in Sarnath, near the Varanasi city of India. One of the most revered as well as most frequented Buddhist pilgrim sites in India; the stupa is cylindrical in shape. Dhamekha Stupa was built on the site where Lord Buddha preached his first sermon, after attaining Enlightened in Bodh Gaya. The stupa is the most impressive as well as the most famous structures in Sarnath and is quite similar in its architecture to the stupas built during that period. The base of the stupa is more than 28 m in diameter and it rises to a height of 31.3 m.

Dhamek Stupa stands on a pedestal and has an entrance, which measures 43.6 m on its feet. The stupa was initially founded during the Mauryan period and has been partly constructed out of red bricks and stones. Colonel Cunningham of Royal British Army carried out the first excavation connected with the stupa, in the early 20th century. Since that time, numerous digging expeditions have taken place in and around the same site. The trunk of the Dhamekh Stupa stands adorned with decorative patterns.

The patterns include geometric and floral designs, along with a broad band of Swastika (fylfot). The Swastika has been carved in different geometrical patterns, with a finely chiseled lotus wreath that runs over and below it. It is said that, in the past, as many as 12 expansions have been carried out at the Dhamekh Stupa. The main area of the Sarnath stupa has been enclosed and comprises of a maze of half-ruined monasteries and votive stupas, making it the most conspicuous structure of the city.

When the initial excavations were carried out at the site, a stone tablet was discovered. It was written on the tablet that the name of the stupa is Dhamekha Stupa and it marks the place where Lord Buddha gave his first sermon. Almost all the historians agree to the view that the stupa is nothing but a distorted form of Dharma Chakra. Some of the historians, who have taken recourse to Prakrit sources, allege that the stupa marks the hutments of the five ascetics, who abandoned Gautam Buddha in Bodh Gaya.