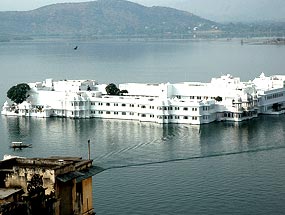 One of the most beautiful palaces of Rajasthan is the Lake Palace, which lies in the city of Udaipur. Built on an island in the middle of the picturesque Lake Pichola, the palace covers an area of approximately 1.5 hectares. The scenic locales, pictorial setting and serene environs of the Lake Palace make it look like a palace straight out of a fairy tale. It was built under the reign of Maharana Jagat Singh and dates back to the year 1743. The palace was built to serve as the summer residence of the royals.

The decorations adorning the Lake Palace speak volumes about the excellence craftsmanship of the artisans of that time. Further enhancing the beauty of the palace are the exquisite textiles and handicrafts that have been used throughout to create an ethnic look. Lake palace has now been converted into a five star hotel. The moment tourists enter the premises of the palace; they are greeted with the soothing murmur of the rippling waves of Lake Pichola. Almost all the rooms in the palace provide mesmerizing views of the lake.

As you look from outside, Lake Palace comes across as a fantasy in white marble, arising out of the aqua waters of Lake Pichola. A massive rock of 4 acres serves as the foundation of the palace. It was initially known as the Jag Niwas, after its founder Maharana Jagjit Singh. If you have visited Agra, the City of Taj, you will find that some of the ornamentations of the Lake Palace are similar to the buildings at Agra. This is because Shah Jahan was quite friendly with Jagjit Singh and let him copy the embellishments from Agra buildings.