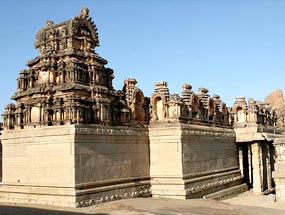 The city Hampi served as the capital city of the Vijayanagar Empire of India in the 14th century. It is situated in the Deccan state of Karnataka and is spread over an area of more than 26 sq km. Hampi stands surrounded by River Thungabhadra in the northern side and by rocky granite on the other three sides. The site where Hampi now stands is believed to have housed the monkey kingdom of Kishkindha (associated with Ramayana). The city is believed to be the abode of Lord Virupaksha and His consort Pampadevi.

It was when the Mughal invaders destroyed the Vijayanagar Empire that the city of Hampi was reduced to ruins. Savage massacre and horrors describe the carnage inflicted upon the city during that time. However, the remains of palaces and gateways of the broken city stand as a testimony to its erstwhile grandeur as well as its senseless destruction. Hampi Ruins have been listed as a World Heritage Center. In March 2002, the Government of India announced that Hampi would be developed as an international destination center.

Almost all the ruins of Hampi are situated along the road that leads to the city, from Kamalapura. The first structure one comes across is the Malyavanta Raghunathaswamy temple, built as per the Dravidian style of architecture. The outer walls of the temple have been carved with odd-looking fish and marine monsters. Then comes the Hampi Bazaar, a beautiful street that is 35 yards wide and nearly 800 yards long. On the western end of the Bazaar lies the Virupaksha Temple.

The temple enshrines the idols of Lord Shiva, Goddess Pampa and Goddess Bhuvaneswari. Virupaksha temple, which has a 120 feet tall tower, has some structures that date back to 11th or 12th century i.e., before the emergence of Vijayanagar kingdom. Situated close by is the huge monolith of Ugra Narasimha, which is 6.7 m tall. There is an inscription near the monolith, which states that it was carved from a single boulder in the year 1528, when Krishnadeva Raya used to reign over the Vijayanagar Empire.

Vithala Temple Complex
One of the most magnificent monuments amongst Hampi ruins is the Vithala Temple Complex, which stands adorned with 56 musical pillars. The famous Stone Chariot is situated to the east of the main hall and houses numerous revolving stone wheels. Right in the front of the sanctum sanctorum is the great mandapa. Huge pillars of granite, about 15 feet in height, support the roof of the temple. Each of the pillars has been cut from one single block of stone. Situated near the temple is the 'Purandra Dasara Mantapa', a protected monument.

House of Victory
The House of Victory was constructed when Krishnadeva Raya came back after launching a successful assault over the King of Orissa. The house is ornamented with rows of beautiful plinths, which have elaborately and elegantly carved. It was here that the kings of Vijayanagar used to sit on a grand throne and enjoy the nine-day Dasara festival celebrations.

King's Balance
King's Balance was the weighing scale where kings weighed themselves against grain, gold or money. The weighed items were then distributed amongst the poor.

Queen's Bath
Queen's Bath is a swimming pool that was used by the queen of the palace. It is 50 ft long and 6 ft deep, adorned with arched corridors, projecting balconies and lotus-shaped fountains that used to sprout perfumed water.

Lotus Mahal
Lotus Mahal is a two-storied palace, which is shaped like a lotus flower from top. The palace used to serve as the summer residence of the queen. Beautiful archways set in geometric regularity festoon this two-storied structure.

Elephant Stables
The Elephant Stables of Hampi have been built as per an amalgamation of Hindu-Muslim style of architecture. It is quite huge in size and used to house about 11 elephants in separate compartments.

Mahanavami Dibba
Mahanavami Dibba is a wooden structure, from which the royalty used to watch the celebrations of the Mahanadu festival. The platform is adorned with beautiful carvings.

Mustard Ganesha
Mustard Ganesha is a 9 feet tall statue of Lord Ganesha, carved out of a single stone. It is also known as Sasivikalu Ganesha.

Noblemen's Palace
This palace used to house the aristocrats and other high-ranking officials.