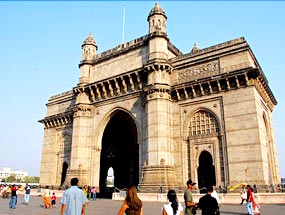 Gateway of India is one of the major landmarks of India, situated in the Mumbai city of Maharashtra. The moment a visitor/tourist arrives in Mumbai by a boat, the first sight that comes in view is that of the massive Gateway of India. As you cross the gateway and move on to the steps behind it, the waterfront of the South Mumbai looms in view. From there, you can take boat trips to various locations, like the Elephanta Island. The monument is basically a 26 meters high arch, which has been made out of yellow basalt and reinforced concrete.

The architecture of the gateway is mainly based on the Indo-Saracenic style. However, elements from the Muslim architectural styles of 16th century Gujarat can also be seen. The central dome of the Gateway of India, standing at a height of 26 m, has a diameter of fifteen meters. When the gateway was constructed, the whole of the harbor front had to be realigned. This was done in order to make it fall in line with a planned esplanade, which was to sweep down to the center of the Bombay city.

Even in the early 20th century, the construction cost of Gateway of India came to somewhere around Rs. 21 lakhs. The cost was mainly borne by the Government of India. Since adequate funds were not available, the plan of building an approach road could not be put into action. The main reason for the construction of the Gateway of India was built to commemorate the visit of King George V and Queen Mary to Bombay (now Mumbai). The visit was made before the Darbar in Delhi that was set up in December 1911.

The foundation stone of the monument was laid by, the then, Governor of Bombay Sir George Sydenham Clarke on 31st March 1911. The architect of the gateway was George Wittet, whose final design was sanctioned in August 1914. The time period between 1915 and 1919 was spent on reclamations at Apollo Bundar, which were done for the land on which the gateway and the new sea wall were to be built. The foundations were finally completed in the year 1920 and the Gateway of India was completely ready in 1924.

Gammon India Limited, established by J C Gammon in 1919, carried out the construction work on the foundations of the gateway. During that time, it was the only construction company in India that was accredited with ISO 9001: 1994 certification in all fields of civil engineering, including design. The First Battalion of the Somerset Light Infantry, which were the last British troops to leave India after the country gained independence, passed through the Gateway of India in a ceremony on 28th February 1948.