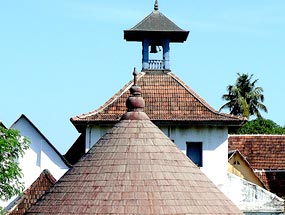 Jewish Synagogue of Kerala is situated in Mattancherry, which lies at a distance of approximately 10 km from Ernakulam. The synagogue (the worship place of the Jews) dates back to the year 1568 and claims the distinction of being the oldest surviving synagogue, not only in India, rather in all the commonwealth countries of the world. Jewish Synagogue is believed to serve as a testimony to the fact that mutual harmony, between the people of different religions, existed in the state of Kerala even centuries back.

The entire monument has been adorned with magnificently painted Chinese tiles. The best part is that no two tiles adorning the Jewish Synagogue are similar to each other. Belgian chandeliers and impressive lighting make up the interiors of the synagogue. The synagogue still houses the rolls of Old Testament, along with the old copper plates, inscribed in Hebrew, which have records of the grants and privileges given to the rulers of Kochi.

Then, there is a rich collection of souvenirs, which were gifted to the kings of Kochi, as a mark of the affection and respect. The most impressive as well as the most popular souvenirs comprise of the carved crowns in wrought gold and silver, presented by the visitors. Jewish Synagogue is not only known for its architectural beauty. Rather, it serves as a significant symbol of the religious and cultural heritage of the Jews. The synagogue was partially ruined in the 1662 wars. However, the Dutch got it rebuilt and also added some structures to it.