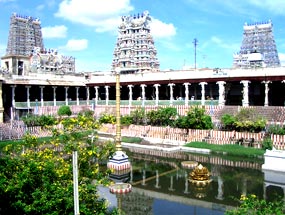 He came with His divine group of followers, with the purpose of marrying Pandya King Malayadwaja Pandya's daughter, Meenakshi, believed to be an incarnation of Goddess Parvati. It is because of this reason that the Minakshi Amman Temple was established in the Madurai city of Tamil Nadu. This temple counts amongst the four most sacred abodes of Goddess Parvati in India. The second legend goes that Indra, the God of heaven, found Shiva's idol, in the form of the lingam, in Madurai and went on to build the Meenakshi Temple.

Even today, during festive processions, a model of Indra's vehicle accompanies the idol of the deity. The temple is known throughout the world for its breathtaking architecture and stands adorned with 12 magnificently sculptured and painted gopurams (towers). Though the temple has been mentioned in Tamil literature since antiquity, its present structure is believed to have been built in the early 17th century. The history as well as the time of construction of the original Meenakshi Amman Temple is not known.

It is said that the temple was pillaged by Malik Kafur, a Muslim invader, in the year 1310. Almost all the ancient features and elements of the temple were destroyed at that time. Arya Natha Mudaliyar, the Prime Minister of the first Nayak of Madurai, was the person responsible behind the reconstruction and restoration of the Meenakshi Sundareswarar Temple. The period of 1623 to 1659 saw valuable contribution being made to it by Thirumalai Nayak. He also got the Vasantha Mandapa constructed.

The sanctum sanctorum of the temple is more than 3500 years old, while the outer walls were made about 1500-2000 years back. The entire temple complex spreads over an area that measures about 45 acres. The tallest tower surrounding the temple is the Southern tower, which rises to a height of over 170 feet. The shrine of Lord Shiva is situated in the heart of the complex and also houses a remarkable sculpture of Nataraja, the dancing form of Shiva. Numerous other structures also make up the complex.

Potramaraikulam (Golden Lotus Tank)
Potramaraikulam is a huge tank, where devotees take bath in the holy water. The area surrounding the temple used to serve as the meeting place of Tamil Sangam, the ancient academy of poets. The works of its members were judged by throwing them in the water. The ones that did not sink in the tank were considered worthy of attention. A pillared corridor surrounds the holy tank.

Swami Sundareswarar Shrine
The shrine of Lord Sundareswarar (Lord Shiva) is situated to the north of Kilikoontu Mandapam. On the way to the temple, one comes across a huge idol of Lord Ganesha, called Mukkurini Pillaiyar, unearthed by King Thirumalai Nayakar. The outer corridor of the temple comprises of the stump of the Kadamba tree, along with Kadambathadi Mandapam and Velli (Silver) Ambalam, a huge hall. The hall houses an image of Nataraja, covered with silver leaves.

Musical Pillars
To the west of the Thousand Pillar Mandapam are the Musical Pillars. The specialty of these pillars is that each one of them produces a different musical note, when stuck.

Kalyana Mandapa
Kalyana Mandapa lies to the south of Thousand Pillar Mandapam. It serves as the venue of the marriage festival of Lord Shiva and Goddess Parvati, held every year during the Chitirai Festival in mid-April.

Vasantha Mandapam (Pudhu Mandapam)
Thirumalai Nayakkar built the Vasantha Mandapam, also known as Pudhu Mandapam. Every year, the hall plays host to Vasanthosavam, the Spring Festival, held in the Hindu month of Vaikasi (April/May). The pillars of the hall are adorned with elaborate sculptures of Lord Shiva and Goddess Meenakshi, scenes from their wedding, along with the figures of ten of the Nayak Kings and their consorts.

Festivals
The most famous as well as the most significant festival celebrated at the Minakshi Sundareswarar Temple is Meenakshi Thirukalyanam, the divine marriage of Goddess Meenkashi with Lord Shiva. It is celebrated every year, in the month of April. Other festivals organized at the temple include Ther Thiruvizhah (Chariot festival) and Theppa Thiruvizhah (Float festival). Apart from this, major Hindu festivals, like Navratri and Shivratri, are also celebrated here.